With the return of Smith and Warner, Finch is wary of how their presence would be received in England.

Australia s limited-overs captain Aaron Finch revealed that Steve Smith and David Warner, returning to the side after the completion of their suspensions in the wake of the ball-tampering scandal last year, were nervous, but stressed that the duo were aware of what they needed to do to fit in with a new set-up.

“It was a really good few hours we had with them. It’s always a bit tougher when it’s just in a meeting-type setting, but it was good to get them in and for the boys to just go to the bar and have a beer with them the night before, to sort of break the ice a little bit for the next day. They came in with almost bright eyes. It’s a totally different set-up to when they left it, Finch was quoted as saying by ESPNCricinfo on Friday.

“What’s important is they’re really keen to slot back into how this current side works and what we’ve been doing really well. They were probably as nervous as anyone coming back into the group you d think guys with 20-odd Test hundreds would just come back in. But it is a different time and they have been out for quite a while.

“But their respect for the group and everything was fantastic. I think it’s about managing not just their expectations, but everyone’s expectations first up.” (ALSO READ: Aaron Finch ready to give up opening slot at World Cup)

With the return of Smith and Warner, Finch is wary of how their presence would be received in England. “The reality is there’s going to be a lot written and said about their returns. We’d be very naive if we didn’t expect that,” Finch said.

“But for us it’s about concentrating on what we can do as a side it might just be not reading the news for a couple of days, which is at times easier said than done. (ALSO READ: Warne expecting Smith, Warner to receive hostile reception in England)

“You just have to go about your own business and make sure you don’t let that become a distraction and at the end of the day, they’re not the ones writing articles or pushing their own [agendas]. It’s important to remember it is going to be what other people’s opinions are and that’s not always reality.”

Quizzed how will he use the leadership experience of Smith and Warner, Finch explained: “You use them tactically, no doubt. They’re such great resources to have as a captain when you’re out on the field. It’d be silly not to use them. There might be days you don’t use them at all, there might be days you use them a lot every situation is different in a game. (ALSO READ: ‘It’s like we never left’ – Smith and Warner welcomed upon return)

“It’s important you lean on them when you need to. But them going about their own business and preparing and getting their mind right to play is the most important thing for the side.” 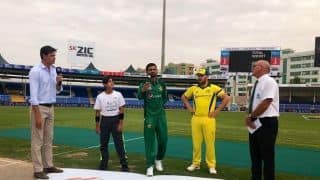