Mumbai veteran Amol Muzumdar remembered the days he had spent with VVS Laxman, while playing for the English county clubs. 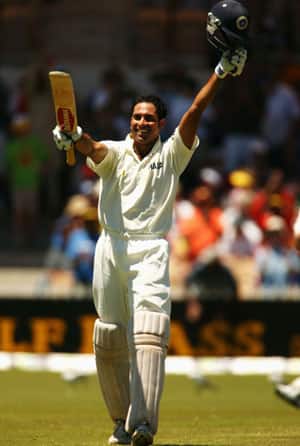 In 1996, while playing for an English club, VVS Laxman ended up getting five tons with four in a row Getty Images

Mumbai veteran Amol Muzumdar remembered the days he had spent with VVS Laxman, while playing for the English county clubs.

“VVS Laxman s retirement from international cricket causes me to go into rewind mode. In 1995, he and I set out to England to play club cricket in Yorkshire. It turned out to be a disastrous summer for us. At one point of the tour, we were close to tears. The cricket was tough and runs did not come our way with some Yorkshiremen being really nasty. It left us crestfallen,” Muzumdar wrote in his MiD-DAY column.

“The next time we boarded a flight for another English expedition, Laxman suggested we write down our tour aims on a sheet of paper and swear by it.”

“Seven hundreds each and let s see who gets there first,” they wrote as they flew to play in England in 1996.

“Laxman ended up getting five tons with four coming in a row while I got six which was a record on the Yorkshire circuit.”

Muzumdar said that even though both of them played cricket together, and Laxman made it to the Indian team and he missed out, he never felt jealous or bad.

“Do I feel a touch jealous/uneasy/bad when I think of this fact? The answer is a big ‘NO . ‘No because it concerns VVS Laxman. I have never met a cricketer as good-natured as him. I would have felt bad if it was another cricketer. We were also on the 1994 tour of England representing the India under-19 and after he scored a brilliant 119 against England at Taunton, Sandeep Patil, our coach/manager proclaimed in the dressing room: “Boys, a future star is born” He didn t look back after that.”

When they were playing for clubs in Yorkshire, Laxman used to play for Pudsey Congs and he played for Windhill CC in the Bradford League.

“One of the toughest leagues I ve played in. We rented a house and had a very stern landlord who went by the name of Dunco, who would insist on keeping the security alarm switch on when we were out. One day, I went to the gym and returned home only to find the microwave oven, television, stereo etc stolen. I called Laxman at his club and informed him of the burglary before facing up to a livid Dunco, who insisted we pay for the losses since I forgot to keep the burglar alarm on.”

“I spent most of that night crying since I didn t have the money to pay up. I called my father in Mumbai and asked him to send us some money. Laxman didn t seem too alarmed. He just kept writing ‘Om Sai Ram on pieces of paper all over the house. ‘Laxman, you got to do something more than just pray, I said.”

“The next morning, Dunco informed us that he was the one who took all the electronic stuff out of the house just to stress how important the security alert system was.”

Muzumdar remembers the time when Laxman used to store chocolates, which Rohan Gavaskar or Atul Ranade finished, whenever they used to visit the duo.

“Being a vegetarian Laxman loved stocking up the fridge with chocolates that came in handy for him. But invariably his stocks diminished whenever Rohan Gavaskar or Atul Ranade came over while Laxman was busy batting for Pudsey Congs. I must credit him for his brave decision to quit on his own terms. This decision is another masterly whip from outside off-stump to the midwicket boundary,” he concluded.