Silverwood said improving the fortunes of the Test team under Root's captaincy would be his top priority.

The 44-year-old was this week promoted from fast bowling coach to replace World Cup-winning head coach Trevor Bayliss, who stepped down last month at the end of his contract.

Silverwood will take charge of the tour of New Zealand, which includes a five-match Twenty20 series, starting on November 1, and two Tests.

“I think (there’s a good) relationship between myself and the two captains (Root and Eoin Morgan), and I’ve got a strong relationship with all the players and backroom staff,” Silverwood said at his unveiling press conference on Thursday. “I understand how the system works, how the team works. That continuity is key.”

Silverwood said improving the fortunes of the Test team under Root’s captaincy would be his top priority.

England won the 50-over World Cup in July for the first time but failed to wrest back the Ashes from Australia, who retained the urn after a 2-2 draw.

Their next Test tour of Australia is in 2021-22. “Job number one is helping Joe we ve got a lot of support around Joe, but to keep moving forward so that in two years’ time we can go to Australia and make a real impact,” he said.

England’s aim is to become the most successful team in international cricket across all formats.

Silverwood said the Test team would have to learn to bat for long periods, build on their bowling success and become more consistent away from home.

ALSO READ: “Got to cut him a little bit of slack,” England bowling coach on Archer’s wicketless showing

“His character, his values, he’s a winner,” said Giles. “You can only prove that in the environment you’re in and he’s proven that in the domestic game.”

Silverwood, who played six Tests and seven one-day internationals for England between 1996 and 2002, coached Essex to the County Championship title in 2017 before joining the England set-up.

“The job he did at Essex was fantastic and we’re still seeing that legacy now. I think the sign of a good coach is leaving the club better than you found it and that seems to be in evidence,” Giles said. 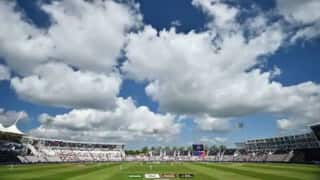