Giles said he was determined to clamp down on the kind of incidents that led to star all-rounder Ben Stokes facing an affray charge last year.

England‘s new director of cricket Ashley Giles said on Wednesday he believes a World Cup and Ashes double is possible for his side this year.

England are currently top of the global 50-over rankings and will head into a home ICC World Cup 2019 that starts in May as one of the favourites to win a trophy they have never lifted. After that tournament, they defend the Ashes in a five-Test series, also on home soil, against arch-rivals Australia.

It will be the first time the two events have taken place in the same country in the same year since the inaugural 1975 men’s World Cup in England. (ALSO READ: Virat Kohli-led Team India can top ICC ODI rankings ahead of England)

Asked which he would rather win, Giles, most recently head of sport at Warwickshire the county he represented during his career as an England left-arm spinner told Sky Sports at Lord’s: “I’ll have both thanks. This year represents a great opportunity for us to do something really special but at the moment that’s all it is.

“The train is moving at a hell of a pace down the tracks for the World Cup, but my role is to make sure we stay on track and there’s nothing there ahead of us that can derail us.

“We’ve probably never been in such a strong position to challenge for both,” he added, with England second only to India in the Test standings. (ALSO READ: Alastair Cook receives knighthood)

Giles is filling a vacancy left by the departure of Andrew Strauss. The former England captain stood down after his wife, Ruth, was diagnosed with a rare form of cancer that eventually led to her death in December.

“Obviously, the circumstances of the position becoming available are not great at all. I honestly feel for Straussy and the family,” said Giles.

“But the opportunity for me was great heading into a really exciting year. Straussy has done a lot of good work. He redressed that balance between white ball (limited-overs) and red-ball cricket, which I think was important and of late we’ve started to see the Test team flourish as well.”

Giles had an 18-month spell as England limited-overs coach that ended in a humiliating defeat by minnows the Netherlands at the 2014 World Twenty20 in Bangladesh. But he was always confident of a return to the England and Wales Cricket Board set-up. “I think I actually said at the time, I’d come back and do this job, perhaps a bit flippantly,” Giles explained. (ALSO READ: ECB chief sees Ben Stokes as ‘role model’ for English cricket)

“I’ve always been driven to work at the highest level and test myself as much as I can. I’m fully aware of the pressure that can come but 2014 was a long time ago.”

One of Giles’s main tasks will be to find a replacement for current England coach Trevor Bayliss, with the Australian stepping down at the end of the 2019 season.

Giles said he remained open to the idea of having specialist Test and one-day coaches despite his own experience when he and Andy Flower split the jobs.

“The benefits of two coaches are clearly (sharing) the workload. The disadvantages are two different voices,” he explained.

“I think we always imagined when Andy and I took the roles on that we’d see two different squads developing. We are actually seeing those squads come together now.”

Giles said he was determined to clamp down on the kind of incidents that led to star all-rounder Ben Stokes facing an affray charge last year following a late-night drinking session in Bristol. Stokes was acquitted. (ALSO READ: Ben Stokes, Alex Hales fined over Bristol brawl, but cleared to play for West Indies tour)

“I have a reputation for being a bit of disciplinarian but you also have to accept these guys are human and are going to make mistakes,” said Giles.

“Everyone needs boundaries, guys need to know where they stand and what’s right and wrong. It’s important to me, how we look to our supporters and how we are respected. It’s almost as important as actually winning.

“A big part for me is us being the best and most respected team in the world.” 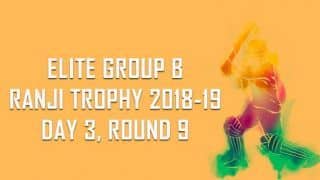