The tragic death of Phil Hughes in 2014 has created awareness in the cricket fraternity regarding a player s safety on the field.

The tragic death of Phil Hughes in 2014 has created awareness in the cricket fraternity regarding a player s safety on the field. On this occasion, Cricket Australia (CA) has initiated a new rule in the Big Bash League (BBL) Twenty20 and one-day competitions this season. The new rule will enable teams to swap a player who had to leave the field due to a head injury for medical attention. The move has gained attention from many and New South Wales (NSW) batsman Nic Maddinson, who was also hit on the head during the match acknowledged the rule as a great move. NSW opening batsman Daniel Hughes became a part of history by becoming the first player to be replaced in a match under CA s new concussion procedure.

Maddinson was quoted in a report from foxsports.com saying, I think (concussion sub) is a great idea. You don t want to see people hit in the head and concussed. If there s the opportunity there players especially are pretty keen on the idea.

Nick Larkin substituted Hughes in the One-Day Cup elimination final between New South Wales and Victoria on Friday after a bouncer from Peter Siddle hit his helmet at a great speed. Surprisingly, Larkin didn t confront a ball as his side won the contest by 31 runs after rains played the spoilsport. It s a good move by Cricket Australia as an injury to a player won t harm his team run in the game as another player can substitute him. 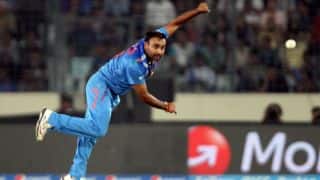