A new cricket stadium boasting world-class facilities in Ranchi built by the Jharkhand State Cricket Association (JSCA) is all set to get international status soon. 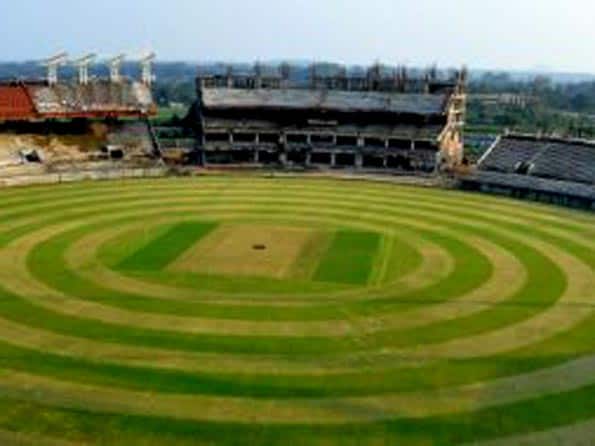 A new cricket stadium boasting world-class facilities in Ranchi built by the Jharkhand State Cricket Association (JSCA) is all set to get international status soon.

The stadium is built within the city limits of Ranchi, the hometown of India captain Mahendra Singh Dhoni. It is only a 10-minute drive from the Ranchi airport and 25 minutes from a five-star hotel, connected by a four-lane road.

“We will be delighted to host an international match at our own stadium,” JSCA president Amitabh Choudhary told reporters.

The JSCA International Stadium Complex was built in two years at the cost of approx Rs. 140 crores. It has an indoor cricket facility, a tennis academy, club house and many other features.

The stadium has a seating capacity of around 35,000 and 76 corporate boxes. The two pavilions, North and South, have five levels each which include VVIP areas, members’ enclosure, donors’ enclosure, president’s box, the BCCI box and two large dressing rooms with separate dining spaces.

It has commentators boxes, rooms for ICC officials and umpires as well. The media centre in the JSCA International Stadium Complex can accommodate 250 journalists.

The complex has 35 guest rooms as well as a club with all the modern facilities.

The stadium has been constructed in such a manner that shadow doesn t fall on any of the nine pitches before 4.45 p.m, even on the shortest day of the year. There is another ground in the complex which has five main pitches and eight practice pitches.

The spectators can enjoy view from two nearby hills on the East and West sides.

The stadium so far has hosted one Ranji match.

Cummins the most 'intelligent' bowler of this decade: Watson