New Zealand, chasing 195, needed 175 to qualify for the final on basis of superior net run-rate. New Zealand achieved it in 18.1 overs.

In a thriller of a contest, England‘s death bowlers triumphed over the New Zealand middle order to pull off a two-run win. New Zealand, chasing 195, needed 175 to qualify for the final on basis of superior net run-rate. New Zealand achieved it in 18.1 overs. However, needing 21 off the last two overs with six wickets in hand, England bowlers choked the run flow with excellent lengths.

Chris Jordan, in the penultimate over, bowled two no-balls and a wide, but New Zealand could just manage 9 runs off it. With 12 required off the final over, Tom Curran gave away just nine.

Colin Munro and Martin Guptill were involved in a 78-run opening stand off just 39 balls. Munro s 21-ball 57 set the tone for the chase that helped New Zealand achieve the 175-run mark comfortably.

Munro belted seven sixes and three fours. Munro pummelled David Willey for two sixes in the first over and followed that with two sixes and a boundary in the second over of the innings from Curran. Munro continued the carnage and gave the same treatment to Willey in the fifth over.

Guptill played a patient innings of 62 and opened up after this fifty before falling in the 17th over. The Hong Kong-born Mark Chapman played a matured hand of 37 but that wasn t enough to guide New Zealand home.

Earlier, Kane Williamson elected to bowl. Morgan, returning from injury, smacked an unbeaten 80 as England posted 194 for 7. England, with three loses in the tournament, were on the brink of exit.

England skipper Eoin Morgan, who missed the last two England matches because of a groin strain, slammed six sixes and four fours. He went to the middle in the fourth over when England lost both their openers with 24 on the board. He went on to add 93 runs off 9 overs with Dawid Malan.

Malan slammed his fourth T20I half-century in only his fifth innings in this format. England were 85 for no loss at the halfway mark before making the last 10 overs count.

New Zealand will meet Australia in the final of the tournament at Eden Park, Auckland on Wednesday, February 21. The match will be played on the same track that produced Australia s record win on Friday against the hosts. 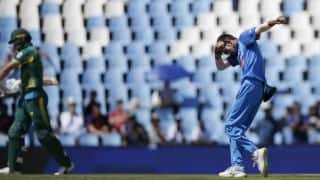