New Zealand and Australia were poles apart on their reading of the Eden Park wicket ahead of Wednesday's opening One-Day International.

Auckland: New Zealand and Australia were poles apart on their reading of the Eden Park wicket ahead of Wednesday’s opening One-Day International in Auckland with Australia backing pace and New Zealand spin. New Zealand rushed leg-spinner Ish Shodhi into their squad Tuesday, while Australia’s line-up showed a preference for firing an aggressive barrage at Brendon McCullum. A four-pronged pace armoury comprising Josh Hazlewood, John Hastings, Kane Richardson and James Faulkner will be deployed, Australia skipper Steve Smith said. McCullum is retiring from international cricket at the end of the Australia series and Smith is determined to give him a fiery send off. FULL CRICKET SCORECARD AND UPDATES: New Zealand vs Australia 2015-16, 1st ODI at Auckland

“Brendon has been a terrific player and leader for a long time. No doubt they’ll want to send him off in the best way possible. It’s up to us to make that not happen,” Smith said. “For us it’s about making sure we’re playing the same way we have been — good, hard aggressive cricket.”

McCullum, however, said Sodhi was added to the New Zealand squad as the match is being played on the same wicket where Kane Williamson was beaten by the spin of Pakistan’s Azhar Ali last Sunday. “The wicket the other day was a little bit slow and we’re going to play on the same pitch,” McCullum said.

“Not many get past Kane so the wicket obviously had a little more turn than we expected. There’s potential that we will look to include (Sodhi) in the side if we think the wicket is going to hold up.”

The Australians do not have pleasant memories of the last time they faced McCullum at Eden Park when the New Zealand skipper belted a 24-ball half century to lead his side to a one-wicket win in a World Cup pool game. Both sides go into the series on a winning run in one-dayers, with New Zealand having completed series victories over Pakistan (2-0) and Sri Lanka (3-1) while Australia dominated India (4-1).

Australia have opted for Shaun Marsh to open with David Warner ahead of the in-form Usman Khawaja. “Shaun has been in the squad and played well in Australia and he deserves the first opportunity,” Smith said.

“He [Khawaja] will play one of the games and he does need a hit going into what is a big Test series for us, and he’s batting extremely well. He’s unlucky to miss out.”

Promising leg-spinner Adam Zampa has also been left out of the side while Mitchell Marsh and all-rounder Glen Maxwell provide additional bowling options. 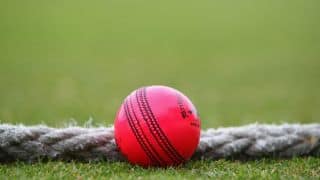