Karn Sharma cleaned up captain Kane Williamson for mere 1. Board President s XI were on the right track. A few more wickets and New Zealand would be in a spot of bother. However, the visitors did not take the tour match lightly. From 73 for 3, Ross Taylor and Tom Latham lifted New Zealand to 239 for 4. Their hundreds eventually propelled New Zealand to a colossal 343 for 9, thanks to Mitchell Santner s late blitz.

BP XI used as many as 9 bowlers. Dhawal Kulkarni was the costliest of them, conceding runs at 8.2. Karn went on to take another wicket, while others were reduced to nothingness. However, Jaydev Unadkat managed to grab 4 wickets amidst the carnage, leaking runs less than 6 RPO.

In came Unadkat when BP XI lost 8 wickets. He used his bat to blasting effect, walloping 44 off 24. Eventually, the cameos could not rescue BP XI, as they fell short of 33 runs. Santner ended with figures of 3 for 44. 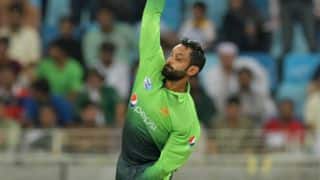