Taylor and Elliott both played well and completed their individual half-centuries.

New Zealand won the first One-Day International (ODI) against Pakistan by a big margin of seven wickets at Wellington on Saturday. It was the partnership between Ross Taylor and Grant Elliott which snatched the match away from Pakistan. Taylor and Elliott both played well and completed their individual half-centuries.

Pakistan had their moments as they picked up the early wicket of Brendon McCullum in the fourth over. Tom Latham also departed soon after he was dismissed by Shahid Afridi only in his first over. Guptill played well for his 39 but he too departed as he was caught at deep backward square leg off Mohammad Irfan. New Zealand grabbed the match from thereon on cruised comfortably towards a win.

Earlier,  Pakistan were bowled out for a paltry score of 210. Shahid Afridi and Misbah-ul-Haq were the only saving grace for Pakistan as both managed to hit individual half-centuries to put Pakistan above the 200-run landmark. This performance again highlighted Pakistan’s batting issues in the 50-over format.

Ahmed Shehzad and Younis Khan followed soon as Pakistan were crumbled to 32 for three. But a 49-run partnership between all-rounder Haris Sohail and Misbah-ul-Haq eased things in the middle before Sohail was dismissed by Corey Anderson. More wickets fell before Afridi arrived to the crease went blitzkrieg. He got to his half-century only off 21 balls which gave some soul to the innings. Afridi’s knock involved nine boundaries and three hits over the boundary. Both Misbah and Afridi fell after completing their half centuries.

Man of the match: Grant Elliott

Michael Clarke denies rift in Australian side and board 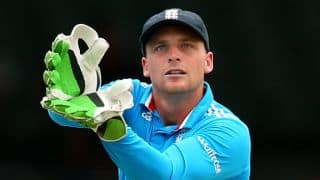