One thing South Africa will take solace in is the fact that they shed their "chokers" tag with a respectable display.

Brendon McCullum had an average day in the office — which in this case meant scoring a 26-ball 59 — while virtually every New Zealand batsman contributed to beat South Africa in a nerve-wracking semi-final of ICC Cricket World Cup 2015. Corey Anderson hit a vital half-century, and Grant Elliott hit a match-winning 84 not out, as New Zealand became the first team to qualify for the final. This was also the first time New Zealand qualified for a World Cup final. Full Scorecard: New Zealand vs South Africa, ICC Cricket World Cup 2015 Semi-Final 1

McCullum went hammer and tongs as usual at the start, showing utter disregard for the calibre of the bowlers unlucky enough to come up against him. One of his shots — a six over Dale Steyn’s head — got the appreciation of the bowler as well. His innings at the start set the game up beautifully for the rest of the batsmen to capitalise, as New Zealand raced away to 71 in just six overs. READ: New Zealand vs South Africa ICC Cricket World Cup 2015 Semi-Final: SA innings highlights

Kane Williamson was bowled by Morne Morkel for six, but Martin Guptill and Ross Taylor consolidated with a 47-run stand. Guptill was looking good after getting off to an edgy start, but was run out for 34 after another mix-up with Taylor. The same duo had been involved in a run out in the quarter-final as well, but Taylor had been the man dismissed on that occasion. Taylor himself was soon done in by JP Duminy, getting out caught down the leg side for 30. Updates: New Zealand vs South Africa, ICC Cricket World Cup 2015 Semi-Final 1

That united Grant Elliott with Corey Anderson in what proved to be a match-winning 103-run stand. Anderson hit six fours and two sixes in his 58. His innings was a high-quality one, but he was out at an inopportune time with for New Zealand still 44 runs away. Elliott was solid at the other end, but Luke Ronchi could only manage eight before holing out off Steyn. Daniel Vettori came in and scored seven off six balls, but it was Elliott who became an instant national hero for New Zealand. He farmed the strike, brought out the big hits just when required. With the Black Caps needing 12 runs to win in the final over, Vettori managed to squeeze out a boundary to third man before Elliot hit a six to win with five runs needed off two balls to make history for New Zealand. READ: South Africa exit ICC Cricket World Cup 2015 with no regrets, says AB de Villiers

Earlier, South Africa well and truly arrived at the ICC Cricket World Cup 2015. AB de Villiers, Faf du Plessis, and David Miller did not merely remove the tag that read “CHOKERS,” they stomped on it, burned it, and disposed of it with maximum prejudice. READ: Corey Anderson and I planned innings to perfection, during New Zealand vs South Africa semi-final match in ICC Cricket World Cup 2015, says Grant Elliott

Few would have backed South Africa at the start of the match, though. After winning the toss and electing to bat, Trent Boult consolidated his position at the top of the ICC Cricket World Cup 2015 with an opening burst that read 7-0-38-2. The way he bowled though, it deserved to be three for 30, with a couple of outside edges finding the boundary and an early chance from de Kock getting dropped behind by Luke Ronchi. READ: Brendon McCullum has four of the 11 fastest 50-plus scores in World Cup cricket

Once both openers — Hashim Amla and Quinton de Kock — were back in the pavilion, Faf du Plessis dropped anchor and went on to play an innings that will long be remembered. His judgement was immaculate, leaving anything he did not have to play, and defending resolutely when needed. He managed to keep the runs coming, albeit at a slower pace. He was on 18 off 40 at one stage, and got to his 50 off 85 balls before opening up. When the rain came down to halt South Africa’s charge, he was batting fluently on 82 off 106 deliveries. Top 10 bowlers in ICC Cricket World Cup 2015

Rilee Rossouw batted well for his 53-ball 39 before slashing one from Corey Anderson to Martin Guptill at point. His innings was an important one as it laid the platform for the man coming in next: de Villiers. The Protean captain was a bit tentative at the start, scoring his first 10 runs in 15 deliveries before opening up. He was dropped on 38, slapping one to Kane Williamson at cover only to see the ball pop out. It was a reprieve that could come back to haunt the Black Caps, as de Villiers went even more on the offensive after that. By the time rain interrupted proceedings, he had scored an unbeaten 60 off 38 balls, and was looking in ominous touch. He went past Jacques Kallis to become South Africa’s leading run-scorer in World Cups, also entering the top-five World Cup run-scorers in the process. Top 10 batsmen in ICC Cricket World Cup 2015

Unfortunately for South Africa, the rain interrupted their momentum, as the match was reduced to a 43-overs-a-side contest. The break affected du Plessis, who gloved a rank long hop from Anderson to Ronchi off the second ball after the break. David Miller walked in next, and started hitting the ball cleanly for the start. He and de Villiers put on 55 runs in no time — with Miller scoring 49 off 18 — as South Africa ended at a commanding 281 for five, leaving New Zealand a target of 298 in 43 overs by the Duckworth-Lewis method. ICC Cricket World Cup 2015: Complete Coverage

Man of the Match: Grant Elliott 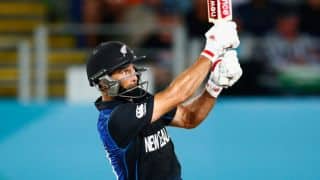