New Zealand and Pakistan will lock horns in the second and final Test of the series at Hamilton beginning from November 25.

The patience of New Zealand’s bowlers in Pakistan’s second innings was crucial in clinching an emphatic eight-wicket victory in the first test at Hagley Oval on Sunday, captain Kane Williamson said. After being dismissed for 133 in their first innings, courtesy of debutant Colin de Grandhomme’s six for 41, Pakistan dug in on Saturday and seemed content to try to sap the hosts’ energy and slowly build their score. At one stage the visitors were 50 for one from 35 overs on a good batting wicket before Neil Wagner made a double breakthrough and Trent Boult grabbed three late wickets to swing the game in New Zealand’s favour. FULL CRICKET SCORECARD: New Zealand vs Pakistan, 1st Test at Christchurch

“Our bowling effort in the second innings,” Williamson told reporters in Christchurch on Sunday as to what he had been most impressed by in the match. “Pakistan showed a lot of resistance early and were very patient. But the way the four seamers got into spells and held their areas for a long period of time and it was passed over to the next guy to take up the baton was world class and why we … got the rewards later in the day.” Williamson also praised his two debutants, all-rounder de Grandhomme and opening batsman Jeet Raval, for the way they had slotted into test cricket.

The 30-year-old de Grandhomme was named man-of-the-match for his haul of 7-64 from 29.5 overs and a hard-hit 29, while Raval top-scored with 55 in the first innings then combined with Williamson in an 85-run partnership to guide them to victory. “They were outstanding,” Williamson said. “To see Colin on that surface, it moved around a bit, he was the perfect bowler for it.

“Jeet came into international cricket and looked like he had been there for years. He was very calm and stuck to the game plan and reaped the rewards. “To go out and open the batting against a very good bowling attack on a surface that was offering something to the seam bowlers and achieve what he did in the first innings, then in a chase for victory to see that composure again is certainly encouraging going forward.” 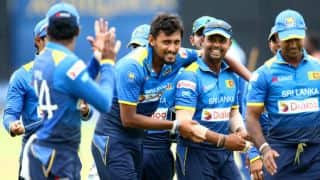 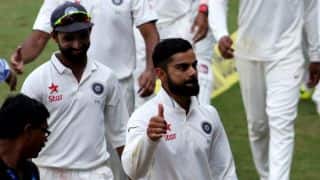