Sabbir Rahman (40*) continued his battle against the New Zealand attack along side Kamrul Rabbi Islam (0*) to guide Bangladesh to lunch at 137 for 6 leading by 193 runs.

New Zealand had a terrific start to Day Five after they scalped the wicket of the double centurion from the first innings Shakib Al Hasan in the very first over of the day. Mitchell Santner in his very first over, induced a poor shot by Shakib, a looped up delivery was miscued by Shakib straight into the hands of the mid on fielder for naught. A horrifying shot by Shakib meant that Bangladesh were off to a bad start on the final day of the Wellington Test. The session mostly saw New Zealand dish out thunderbolts against Bangladesh batsmen which meant their lead was curtailed to just 193 runs at lunch.

Sabbir Rahman came out in the middle before skipper Mushfiqur. Wagner who got peppered by short-ball on Day Four, set the batsmen to near perfection. Pushing him back on the back foot, Wagner asked Mominul to drive and he obliged. Mominul went for the expansive drive giving a simple catch to Colin de Grandhomme at gully. With no Imrul Kayes, Bangladesh were technically 6-down when an injured Mushfiqur out in the middle, who looked in clear discomfort. Mushfiqur s partner.

Mushqifur and Sabbir continued their staunch resistance amidst all the chatter in the middle by the New Zealand players. Mushfiqur through out the session played with only his one hand (top hand).

Sabbir was lucky to survive on 17, after Trent Boult dropped him off his own bowling.

There was some serious bad news for Bangladesh, afterwards Mushfiqur had to be carried off in an ambulance once he got hit on the helmet by Tim Southee in the 42nd over. Taskin Ahmed came out in the middle in place of Mushfiqur.

Just at the stoke of lunch, Boult struck gold cleaning up Taskin Ahmed, who stayed in the middle for 23 deliveries. Boult got the ball to rock back into the batsmen late and uproot his stumps off a deflection.

Sabbir Rahman (40*) continued his battle against the New Zealand attack along side Kamrul Rabbi Islam (0*) to guide Bangladesh to lunch at 137 for 6 leading by 193 runs. 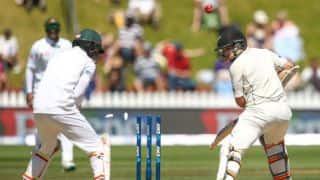