Neesham led New Zealand's fightback with a career-best undefeated 97 to lift them from a precarious 83-5 to 237-6 in their 50 overs at Edgbaston but they went down to their first defeat of the tournament.

All-rounder Jimmy Neesham is confident that New Zealand’s defeat against Pakistan in Birmingham on Wednesday will not derail their World Cup bid.

The 2015 runners-up lost by six wickets to a resurgent Pakistan, on the back of a brilliant unbeaten 101 by Babar Azam and three wickets from teenage paceman Shaheen Shah Afridi.

Neesham led New Zealand’s fightback with a career-best undefeated 97 to lift them from a precarious 83-5 to 237-6 in their 50 overs at Edgbaston but they went down to their first defeat of the tournament.

Victory would have seen Kane Williamson’s team become the second team to qualify for the World Cup semi-finals after defending champions Australia.

Despite the setback New Zealand, who have never won the World Cup, are still well-placed, second in the 10-team table on 11 points from seven games.

“I think you’d be pretty naive to expect to go through the whole tournament unbeaten,” said the 28-year-old Neesham. “There are too many quality teams going around to expect to win every game.

“We prepared for a tournament where we’d probably lose one or two games, but for us it’s all about making it to the semi-finals, and you’re only two good games away from lifting the trophy. So for us nothing changes.

“We’ll prepare for the next game the same way we’ve prepared for the last six,” said Neesham, whose team next play Australia at Lord’s on Saturday, with their final game against hosts England on July 3.

Neesham, who added 132 for the sixth wicket with fellow all-rounder Colin de Grandhomme (64), believed his side had enough runs on the board against Pakistan.

“I think probably being 46-4 was a pretty significant moment in the game,” said Neesham of New Zealand’s bad start, caused mainly by Shaheen’s burst of three wickets in 20 balls.

“I think Pakistan’s bowling was obviously really impressive. We sort of try and dig ourselves out of that hole and that took a lot of doing, but I think we potentially got to a score that was defendable.”

Neesham said the fourth-wicket stand of 126 between Babar and Haris Sohail (68) had taken the game away from New Zealand.

“Obviously, the way Babar and Sohail batted didn’t allow us to get some momentum and try to get into their middle order and that was the difference,” he added. 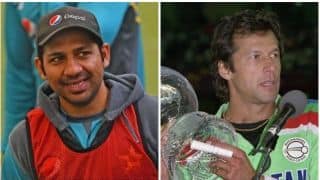 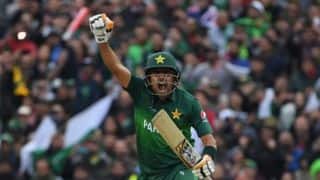