New Zealand skipper Brendon McCullum, while leading his country’s side in dominating India in the ongoing series, will also have his sights firmly set on his business ventures in the cricket crazy sub-continent.

McCullum, whose double hundred in the first innings of the Auckland Test has put his team in a commanding position, has teamed up with fellow New Zealanders Stephen Fleming and Daniel Vettori to do business in India, ranging from premium liquor and meat to an online scoring system.

Overseas players, including the ones from New Zealand, are anyway making good money from the lucrative Indian Premier League (IPL) and it can’t be a bad idea to explore commercial interests in a country where they are more popular than back home.

“One of the biggest draw cards of playing cricket in India is that you can get into other things as well. The profile of the cricketers is much greater than back home. Though, it’s not that you walk down the street in New Zealand and no one would recognise us,” McCullum said during the Champions League Twenty20 in October, when asked about the reason for setting up business in India rather than anywhere else.

While McCullum and former skipper Fleming have been selling online scoring systems for some time, the accomplished duo and Vettori have joined hands in promoting the export of premium New Zealand products mainly salmon, dairy products and wine to India.

The export will be done through a company called Quality New Zealand and the man behind this project is another former New Zealand cricketer Geoff Allott, best remembered for being the joint leading wicket taker in the 1999 World Cup. A back injury meant his fast bowling career could only last 10 Tests and 31 One Day Internationals (ODI’s). But he had his commerce and management degree to fall back on.

Allott is running the show alongside his India-based compatriot Geoff Finn while active cricketers McCullum and Vettori are the face of the company.

McCullum can’t help praising the business acumen of Allott, who can now easily be called a burly businessman rather than the lanky speedster of yore.

“We have a saying in New Zealand that you never trust a skinny chef and he [Allott] is the one who is marketing products and people must be thinking he also consumes these products. On a more serious note, he is a very intelligent man and when he wants something, he goes out to get it. That is what Fleming and I looked at before getting involved with him. It is great to have Dan [Vettori] in the mix too,” said McCullum.

Allott on his part is thrilled to reconnect with India, a place he could not tour as a cricketer but visited in 2008 and 2010 as general manager of New Zealand Cricket (NZC).

“It is great to reconnect with India. I share strong relationships with the colleagues in the Indian cricket board from old cricketing days and now taking them forward in the business. We have a unique advantage in our business, we are constantly talking cricket and quality food,” said Allott, who is based in Cristchurch.

‘Quality New Zealand’ was conceived three years ago and Allott is confident that full-fledged trade will begin after they get the required clearances shortly to export goods to their Bangalore office in India.

“The trading ties could be the biggest between India and New Zealand. People of our countries respect each other and have a lot of similarities,” summed up the affable cricketer-turned-entrepreneur. 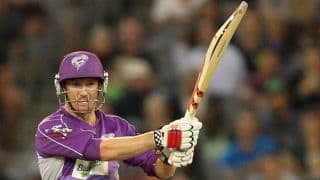