ICC Champions Trophy 2017: Bangladesh will await the result of Australia-England clash and hope for hosts' victory to ensure a semi-final berth.

Records tumbled at Cardiff as Bangladesh eliminated New Zealand from ICC Champions Trophy 2017 in match 9 at Cardiff. In a must-win encounter for both sides, Kiwis managed a modest score of 265 for 8 and had Bangladesh reeling at 33 for 4 before a remarkable fightback staged by Shakib Al Hasan and Mahmudullah saw them home. The duo registered individual tons and ensured a 5-wicket victory for the Tigers as they live another day in the tournament. They will now await the result of Australia-England tie on Saturday. In case of an abandoned game between England and Australia, the latter will end with same points as Bangladesh. Bangladesh will however go through as they have won more. Full cricket score: BAN vs NZ

Defending 266, New Zealand bowlers had a task in hand. Nonetheless, the menacing pair of Tim Southee-Trent Boult lived up to expectations and rattled the Bangladesh with swing and a barrage of good length deliveries. Southee removed in-form opener Tamim Iqbal for nought with a hint of late movement and trapped him leg before. Sabbir Rahman came in at No. 3 and struck some boundaries before falling pray to Southee. It was another good length delivery and kissed his willow to give a sitter to Luke Ronchi.

Soumya Sarkar didn’t look comfortable as well. Sarkar was dismissed by inward movement and pace off Southee as umpire Ian Gould raised his finger without any hesitation. Birthday boy, Mushfiqur Rahim, came in at No. 4 and bought some time in the middle. He was reprieved at 4 by Ross Taylor as he edged one to the slips and the veteran New Zealander dropped a regulation catch. Mushfiqur played a good shot off a short delivery, off Adam Milne, before being beaten by pace to see his stumps disturbed for a 34-ball 14. It was pitched up by Milne to pick up his first scalp.

Bangladesh needed a big partnership and got one in form of Shakib Al Hasan and Mahmudullah. Two experienced campaigners guided the innings by understanding the need of the hour. The pair ensured the looseners were sent to the ropes whereas the strike rotation was at par. Kiwis missed a trick or two by bowling short, keeping the field open and Williamson not sticking with Corey Anderson, a genuine wicket taker in middle overs, for long. He could have also brought back one of his prime bowlers a little early. James Neesham, Anderson, Mitchell Santner and Williamson remained wicketless as Mahmudullah-Shakib added 100-run stand and got to their individual fifties. The highlight of the partnership was that the duo played out Southee-Milne when the ball was doing a bit and applied a cautious approach towards Santner. They knew which bowler to respect and kept the scoreboard ticking versus the others.

The biggest aspect of Shakib-Mahmudullah’s partnership was their resilient approach which they carried on for long. They broke numerous records progressing forward. Shakib and Mahmudullah added 150-run stand, fifth highest stand for the subcontinental side for any wicket, and also notched up Bangladesh’s highest partnership abroad. Interestingly, the previous best (166-run stand between Rahim-Tamim) also came in the tournament-opener versus England. Adding 179 for the fifth wicket, the duo also brought up the highest stand for their country for any wicket and later became the first pair to register 200 runs for their camp.

Shakib brought up his seventh ODI century by smacking a six off Milne before falling for 114. On the other hand, Mahmudullah joined the party by slamming his third hundred (second against New Zealand) and guided the ship with 16 balls to spare. All of Mahmudullah’s tons have come in ICC events which shows the class of the 31-year-old. The game-changing 224-run partnership between Shakib and Mahmudullah compiled of 18 fours and 3 sixes. On the contrary, Kiwis would be disheartened as they conceded 18 wides.

With this win, Cardiff continued to remain a happy hunting ground for the Asian side as they had defeated Australia in 2005 and now eliminated New Zealand.

Earlier, amidst lots of speculations, Kiwis opted to bat on a green turf with overcast conditions. Their innings was held by Williamson, Taylor and Neil Broom. Ronchi and Martin Guptill gave the side a decent start by adding 46 runs for the first wicket. However, the duo were sent back to the hut by Taskin Ahmed and Rubel Hossain. Taylor-Williamson registered their ninth fifty-plus stand in ODIs before some dry overs led to his run-out for 57. This was his third run-out in 4 innings and fourth consecutive fifty in Champions Trophy. He also became the highest-run scorer in the ongoing tournament courtesy his gritty knock.

The onus shifted to Taylor and Broom as the pair added a 49-run stand to keep the innings on course. Nonetheless, Taylor was struggling to keep the scoreboard ticking and perished after his 37th half-century. Broom failed to take center stage and his fall led to a lower order collapse. Neesham scored 23 but cameos from Southee and Santner saw the team total to 265 for 8. Bangladesh bowlers tested the New Zealanders and kept striking at regular intervals. They did not allow them to score freely (only 62 came off the last 10 overs) for longer periods and Mossadek Hossain’s 3-for followed by Taskin’s 2 for 44 restricted Kiwis below 280. Other bowlers also chipped in to dent Kiwis’ progress.

The whole of Bangladesh will be glued to the television sets for Saturday’s renewed Ashes-rivalry between England and Australia in coloured clothings at Edgbaston. They will hope for the home side to emerge victorious so that they would progress to the next round along with Eoin Morgan’s unit. 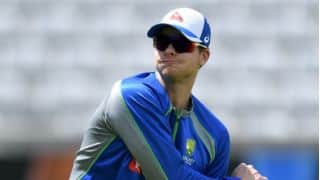