South Africa lost their second wicket when AB de Villiers was caught by Nathan McCullum off the bowling of George Worker for a 21-ball 33 during the first Twenty20 International (T20I) against New Zealand at Durban on Friday. The South African skipper smashed five fours during his stay in their crease, before a wrong placement of the shot caused Worker to get his maiden international wicket. The dismissal occurred right after de Villliers brought up the 50-run stand with Hashim Amla, who was batting on 29 on the other end. LIVE SCORECARD: South Africa vs New Zealand, 1st T20I at Durban

New Zealand earlier finished on a score of 151 for 8 after 20 overs. While Kane Williamson (42) and Martin Guptill (42) got the Black Caps off to a flying start, with George Worker (28) chipping in with a couple of big hits, it was the trio of David Wiese (2 for 24), Kagiso Rabada (2 for 28) and Aaron Phangiso (2 for 29) that ultimately prevented the Kiwis from getting away with a big total. The visitors lost their last eight wickets for a mere 49 runs. It was Guptill’s run-out that ultimately turned the match around its head. LIVE UPDATES: South Africa vs New Zealand, 1st T20I at Durban

South Africa earlier won the toss and elected to field, with AB de Villiers coming in place of the injured Faf du Plessis as the Proteas skipper. The hosts opted for a four-prong pace attack in Morne Morkel, Kagiso Rabada, Kyle Abbott and David Wiese. Aaron Phangiso was picked as the first-choice spinner in place of Eddie Leie. New Zealand opted for Mitchell McClenaghan, Adam Milne and Doug Bracewell. Worker was retainie in the playing eleven after his hard-hitting performance against Zimbabwe. READ: New Zealand innings report 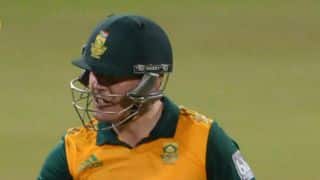