Bangladesh as expected continued to bat on Day Three after accumulating 556 runs on Day Two against New Zealand in the first of the two-Tests. Basin Reserve saw Shakib Al Hasan and Mushfiqur Rahim pound heavy runs to snitch up a 259-run stand between them and make New Zealand pay for their sloppy fielding, and at times poor bowling. Day Three was no different as Sabbir Rahman notched up his second Test fifty that saw Bangladesh declare their innings on 595 for 8. New Zealand openers Jeet Raval and Tom Latham had a shaky start to their innings but soon found their mojo. New Zealand going into lunch trailed Bangladesh by 540 runs at 55 for 1.

Neil Wagner grabbed the first and only wicket of the day as he got Taskin Ahmed for 3. Taskin trying to go for the drive gave a simple catch to Tim Southee standing at second slip. This was also Wagner s fourth wicket. Sabbir Rahman, held up one side of the pitch adding inconsequential runs for Bangladesh in their march towards 600. Kamrul Rabbi, not to be overshadowed displayed his defensive skills to good affect. Sabbir made merry on a flat deck and ended up scoring his second Test half-century in 85 deliveries. Bangladesh and the team management decided to declare their innings on 595 for 8 with Sabbir 54 not out and Kamrul 6 not out. Wagner was the star bowler for New Zealand picking up 4 wickets for 151, while Southee and Boult scalped two each.

This was also Bangladesh s second highest Test total after 638 runs against Sri Lanka set at Galle in 2013.

In reply, New Zealand send Jeet Raval and Tom Latham to open their innings. Bangladesh, on the other hand, was without their regular skipper Rahim, who was being treated for a thumb and finger injury. In a surprise move stand-in skipper Tamim Iqbal opened the bowling with left-arm spinner Mehedi Hasan. (First time ever a genuine spinner has opened bowling in New Zealand).

Raval after surviving a probing spell by Subhasis Roy found his mojo against Mehedi. Latham, on the other hand continued batting with some nerves. Taskin Ahmed could have his first Test wicket in his first over if not for Sabbir who dropped Raval on 24. Raval and Latham soon brought-up their fifty run stand with no risks whatsoever.

New Zealand lost Raval at the stoke of lunch. Kamrul picked up Raval on the first ball of his spell after the latter gave a simple catch to the wicketkeeper for 27. Skipper Kane Williamson came out at No.3 with only 7 minutes remaining for lunch.

New Zealand going into lunch were 540 runs behind Bangladesh with Latham and Williamson out in the middle at 55 for 1. 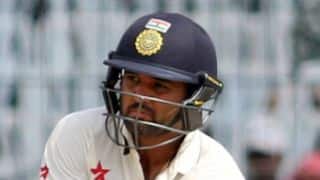