New Zealand's Tim Southee took two wickets in two balls as England collapsed on the second day of the first Test at Lord's on Friday.

England won by 170 runs
Man of the Match: Stuart Broad 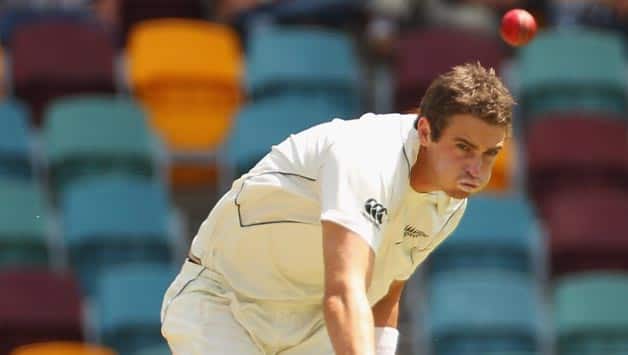 New Zealand’s Tim Southee took two wickets in two balls as England collapsed on the second day of the first Test at Lord’s on Friday.

At lunch, England, who had won the toss, were 209 for eight, having lost four wickets for nine runs in 17 balls against accurate New Zealand seam bowling in overcast conditions.

Jonny Bairstow, three not out overnight, was unbeaten on 29, with Steven Finn two not out. England resumed on 160 for four.

Joe Root (25 not out overnight) and Yorkshire colleague Bairstow kept New Zealand at bay for more than an hour after the new ball was taken in Friday’s first over.

Root came into this match, his home Test debut, on the back of making 179 for the second-string England Lions against New Zealand. But there was no similar success on Friday.

Southee made the breakthrough with one of his worst deliveries of the session, a ball down the legside.

Root, however, did not get enough on his glance and was caught behind by wicket-keeper BJ Watling for 40, the best individual score of the innings so far.

New batsman Matt Prior had frustrated New Zealand with a superb unbeaten hundred that ensured a draw and a 0-0 result in a three-match series when the teams last met in Auckland in March.

But the wicketkeeper was lbw first ball Friday to Southee, caught on the crease. He reviewed Steve Davis’s decision but the Australian umpire’s verdict was upheld.

Stuart Broad survived the hat-trick, the ball whistling past his off-stump.

But he was soon out for nought when plumb lbw to a full-length ball from Neil Wagner before the left-arm paceman had Graeme Swann caught behind.