New Zealand bowlers made use of the early swing and bounce from the pitch to reduce Sri Lanka to 39/2.

Sri Lanka chasing a mammoth 431 looked completely out of touch as New Zealand bowlers Trent Boult and Tim Southee have troubled them all the way going into lunch. Boult could have easily picked up[ a few more wickets had his edges found the fielder rather than bouncing up in the ground. Boult did strike early by dismissing Kusal Mendis in the 9th over of the innings Mendis made only 8 runs of 19 balls. It got even worse for Sri Lanka as Neil Wagner struck in his very first over of the day picking up Udara Jayasundera  for a duck. Sri Lanka at lunch are still 393 runs away from New Zealand’s total of 431. Live Cricket Scorecard: New Zealand vs Sri Lanka 2015-16, 1st Test at Dunedin, Day 2

Sri Lanka after ending Day 1 on a high picking up six wickets in the final session resumed play and continued their show and nabbed the remaining two New Zealand batsmen. Resuming Day 2 on 408 for 8 New Zealand Doug Bracewell and Neil Wagner would have liked to get the score to across 450, just to keep the match far away from the grasp of Sri Lanka. Lanka on the other hand were looking to restrict the hosts’ for as low as possible and the succeded in doing so. Nuwan Pradeep who had already picked up 2 wickets yesterday, looked to carry on his form and finished off the tail in style. Bracewell looked good all through out his innings of 47, which is also his career best score in Test was the last man to be dismissed as New Zealand were bundled out for 431. Live Cricket Score, New Zealand vs Sri Lanka 2015-16, 1st Test at Dunedin, Day 2

Earlier on Day 1, Martin Guptill made 156, had  a 173 run partnership with Kane Williamson (88) for the second wicket and also shared of 89 with captain Brendon McCullum as New Zealand dominated most of Day1 against Sri Lanka at Dunedin. Lanka did manage to make a small comeback picking up six wickets late into the final session of play, to give them a somewhat advantage heading into Day 2. 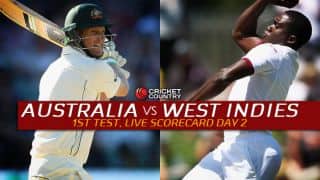 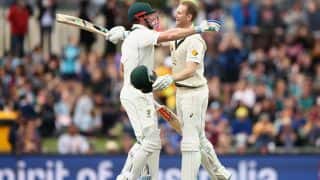