The Sri Lankan openers dug in and displayed steel in the second innings.

Sri Lanka fought back in the second innings of the first Test at Christchurch against New Zealand with a resolute 84-run opening stand . The visitors batsmen made a dramatic improvement on their first innings performance finishing Day Two at 84 for no loss.

Annihilated by Brendon McCullum, demolished by Trent Boult and Tim Southee in their response to New Zealand’s 441, Sri Lanka have been significantly more assured, following on in their second innings. The Sri Lankan openers dug in and displayed steel that helped them topple England in England. Both Dimuth Karunaratne and Kaushal Silva weathered the storm under unfavourable conditions against the skill and guile of Southee and Boult to gradually grow in confidence and hold fort at the end of the day’s play. The unbeaten opening stand of 84 between Karunaratne and Silva was also the highest partnership of the match for Sri Lanka. Karunaratne has finished Day Two unbeaten on 49, where as Silva’s got 33 runs to his credit.

Earlier during the day, although the visitors dismissed New Zealand for 441, taking the last three wickets for just 14 runs their joy was short lived. The Kiwis hit back with the ball immediately making crucial inroads early into the Sri Lankan innings. The tourists failed to lift themselves from a perilous 15 for 3 to eventually be bowled out for a paltry 138, conceding a 303 runs lead. Angelo Mathews fought a lonely battle in the middle scoring his 19th Test fifty. As many as six Sri Lankan batsmen were dismissed for single digit scores in the first innings. For the hosts Trent Boult led the way with the ball registering impressive figures of 3 for 20. Neil Wagner and Tim Southee also made healthy contributions picking up three and two wickets respectively. 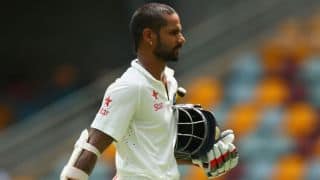 India vs Australia 3rd Test at Melbourne: David Warner may not bat in 2nd innings