New Zealand have announced uncapped pair of Tom Bruce and Ben Wheeler in the 14-man squad for the three-match T20I series against Bangladesh, scheduled to begin from January 3, 2017. While Trent Boult has been rested for the first match, his bowling partner Tim Southee has been rested for the entire series. Bruce is a hard-hitting batsman, who averages 45.20 in 15 T20 domestic matches. Wheeler, on the other hand, has played six ODIs for the Black Caps, but is yet to make his debut in the shortest format. With Mitchell McClenaghan, Adam Milne not part of the squad due to injury and Southee rested, Wheeler is likely to make his debut.

New Zealand chief selector Gavin Larsen said, “Tom [Bruce] has been one of the leading players in the Super Smash the past two years, and is one of the cleanest strikers of cricket ball in the country. He’s averaged 76 at a strike-rate of 174 this season, so Tom’s proven himself to be a very dangerous player. Power is a critical element to Twenty20 cricket, so to have him alongside the likes of Martin, Corey and the two Colins is an exciting prospect.”

Wheeler s last international appearance came against South Africa in Durban in August 2015. “It’s been great to see Ben back playing cricket and getting near his best. He s put in a lot of hard work to get to this point again, so we re looking forward to having him back in the mix. Ben’s ability to swing the ball at a decent clip can trouble any batsmen, as he’s shown in domestic cricket this season,” Larsen said. 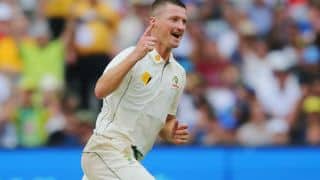