The Basin Reserve Pitch is generally considered as a pacer's paradise.

New Zealand coach Mike Hesson has said that his side will need to have a look at the Wellington wicket before deciding whether to go for an all-pace attack or retain a spin bowler in their ranks, ahead of the second test against India on Friday.

The New Zealand pacers which include Trent Boult, Tim Southee and Neil Wagner look in terrific form as they snared all 20 Indian wickets in the first Test at Auckland, with Wagner being the most impressive with his eight scalps, reported 3news.

This has caused a dilemma amongst the New Zealand ranks as to whether they should bring out an all-pace attack in Wellington, especially since the Basin Reserve pitch is renowned to the help it provides to fast bowlers.

It generally holds that pace throughout the Test match and it certainly did against the West Indies, albeit that it was only three days. I think the overcast nature assisted the ball swinging in Wellington and let’s hope we get something similar over the next week, said Hesson who is expecting a pace bowlers paradise in Wellington.

Hesson also maintained that New Zealand will pick a spin bowler only if it was absolutely necessary to do so which is a sign of the New Zealand team persisting with their all-pace attack come the match against India.

The chances of young spinner Ish Sodhi playing in the game also look less since the New Zealand think-tank may probably not alter with their bowling combination and may stick to the plan of outpacing and outbouncing the Indians at Wellington.

Sodhi finished with figures of 0 for 91 in his 21 overs in the first Test and never looked threatening enough to trouble the Indian batsmen.

He’s learning quick and he will come back stronger. We have a lot of faith in Ish, said Hesson of Sodhi.

As New Zealand will miss the services of Jesse Ryder and Doug Bracewell for the upcoming Test against India, they may suffer another blow if Ross Taylor pulls out of the team due to family commitments .

There’s a lot of players in the first-class scene who are putting their hand up and deserve opportunities, said Hesson of Taylor s replacement.

Whoever that is I’m sure will step in and will want to make a major contribution, concluded Hesson. 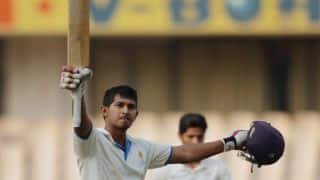