Kane Williamson (33*) and Ross Taylor (17*) managed to survive the final half and hour before tea to take New Zealand at 91 for 2, still needing 126 runs to win.

Bangladesh, after bundling out for 160 against New Zealand, stuck crucial blows to stifle the hosts chase. Set a target of 217 to win, New Zealand lost both their openers cheaply, as Mehedi Hasan announced himself on the tour finally. Mehedi, who went wicket-less in the first innings, bowled much tighter and gave his side a look in. It was the pair of Kane Williamson and Ross Taylor that steadied a sinking ship of New Zealand. Heading into tea, the BlackCaps are placed at 91 for 2, needing more 126 runs to win.

New Zealand bowlers continued to ploy the short-ball against Bangladeshi batsmen in the post-lunch session. Sabbir Rahman who has been a pillar of strength on this New Zealand tour for Bangladesh continues to showcase his batting prowess. Sabbir got to his second Test fifty in 97-balls. Southee drew first blood in the session getting Kamrul Rabbi Islam for 1. Kamrul lobbed a simple catch to Colin de Grandhomme standing at slips off a bouncer.

Imrul Kayes who was stretchered off on Day Four came out in the middle for his side at No.9. Kayes got his second second innings start off a cracking boundary off the pull shot. Sabbir soon departed for 50, after giving his wicket away to Trent Boult. Sabbir went for the expansive drive, gave a regulation catch to BJ Watling.

Kayes continued to hit cheeky boundaries during his return stay adding much needed runs for Bangladesh. Boult brought the Bangladesh innings to an end cleaning up Subashis Roy for duck.

Bangladesh in their second innings folded for 160 for 9, asking New Zealand to chase 217 runs to win the first Test at Basin Reserve in Wellington. Kayes remained unbeaten on 38 off 46 balls, while Boult stared with the ball picking up 3-wickets for New Zealand. Neil Wagner and Mitchell Santner picked 2 wickets apiece while Southee picked just one.

In reply, New Zealand openers Jeet Raval and Tom Latham got their side to a steady start, but not before the former departed after making 13. Mehedi Hasan, who went wicket-less in the first innings, bowled a fuller length ball to which the batsmen gave a simple catch.

Skipper Williamson came in at No.3 got off the mark via a back-foot punch for a boundary. Mehedi took his second as Latham chopped the ball on to his stumps for 16. Taylor came out at No.4 added some crucial runs for his side. 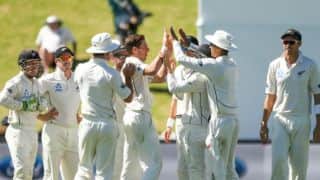