New Zealand media on Monday condemned the Black Caps' lack of fight in their crushing first Test defeat to England at Lord's, when they collapsed for just 68 in the second innings. 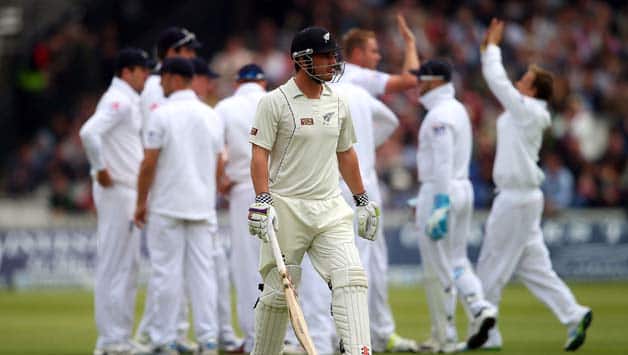 New Zealand media on Monday condemned the Black Caps’ lack of fight in their crushing first Test defeat to England at Lord’s, when they collapsed for just 68 in the second innings.

The total was the 10th lowest at the “home of cricket” and the ninth worst by a New Zealand team, reviving memories of the Black Caps’ humiliating dismissal for 45 against South Africa in Cape Town in January.

Fairfax Media sports writer Marc Hinton said it was not so much the loss by the world’s eighth-ranked Test side against the second that grated, but the players’ failure to display the grit that Kiwis demand of their sporting teams.

“I think you’re entitled to ask where were the fighting qualities… that’s the thing that disappoints me. This is a trademark of the Black Caps, when things get tough they tend to fold the tents way too easily for my liking.”

The rout was all the more galling for New Zealand fans because if follows a home series against England in March when the Black Caps defied expectations to draw three Tests, dominating two of them.

The New Zealand Herald‘s Andrew Alderson highlighted that for only the second time in New Zealand Test history none of the top six batsmen reached double figures in a second innings that lasted less than two hours.

“1, 9, 6, 0, 5, 8 reads like the makings of a telephone number but is actually the individual scores of the New Zealand top six who could not turn an outstanding Tim Southee bowling performance into batting success,’ he wrote.

Southee took 10 wickets in the match to keep New Zealand competitive until their batting disaster and the Dominion Post‘s Mark Geenty said Southee’s performance provided one positive to cling to.

But he said the defeat reopened wounds that were just beginning to heal after the Cape Town capitulation, making it difficult for the New Zealanders to regroup.

“The question is now, what kind of psychological damage this causes to New Zealand heading into Friday’s second and final Test at Leeds,” he said.

The New Zealand media, however, were unanimous in praising Stuart Broad, who destroyed the Black Caps with a career-best seven for 44 in the second innings.

BCCI should educate players from U-16 level to curb spot-fixing: Ravi Shastri