New Zealand is reportedly planning to bounce India out in the upcoming two-Test series with another short-pitched barrage similar to the one responsible for their 4-0 One-Day International (ODI) series romp.

Although momentum between series is an over-used and oft-questioned phrase, but the recent matchups and New Zealand dominance must have an effect on the teams’ respective confidence levels, with the promise of bouncy, seaming pitches in Auckland and Wellington.

According to Stuff.co.nz, captain Brendon McCullum said that their bowling coach Shane Bond is ”pretty hot” to see bowlers be hostile and aggressive, adding that it is good that they have bowlers who can employ such tactics on the field.

The report mentioned that Eden Park’s drop-in pitch never has a green look about it, but plenty of grass will no doubt be left on at the behest of the New Zealand management, with pace, bounce and seam also to be demanded.

McCullum further said that with home town advantage, New Zealand does not want to be playing on turning pitches as that would play into India’s hands, adding that it would suit them if they could get a wicket similar to what they played against West Indies at the Basin in Wellington.

The report mentioned that New Zealand’s win at the Basin in December set the benchmark, with Trent Boult scything through the tourists’ batting and Tim Southee backing him up in a magnificent display of swing bowling.

India’s Test team are coming off a 1-0 series defeat in South Africa; the first a thrilling draw which the tourists dominated, and the second a 10-wicket win by South Africa on a turning pitch in Durban, the report added. 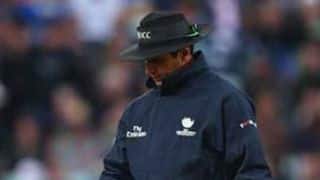