New Zealand posted 503 runs in the first innings against India on Day Two of the first Test at Auckland on Friday. The Kiwis’ score was set up by a double century from Brendon McCullum and a century from Kane Williamson (113).

New Zealand were put in to bat by MS Dhoni on a green wicket under overcast conditions. The openers weathered the first 10 overs but the pacers managed to land early blows. Ishant got the first breakthrough removing Hamish Rutherford for six. Peter Fulton followed, dismissed by Zaheer Khan for 13. The hosts were further pushed with Ross Taylor too dismissed by Ishant. At 30 for three, it was left to Kane Williamson and McCullum to do the resurrection process.

The duo dominated the Indian attack. Williamson got a reprieve on 32 dropped by Murali Vijay off Mohammed Shami’s bowling. They scored runs at will and put New Zealand on the front foot. Williamson was the first to complete his century, his fifth in Tests. McCullum too completed his ton soon after. The partnership was finally broken when Williamson was caught down the leg-side off Zaheer’s bowling. Williamson scored 113 and shared a 221-run stand with McCullum.

Corey Anderson joined McCullum and they remained unbeaten on Day One at 329 for four. On the second morning runs came thick and fast with Anderson playing some fine strokes. He was finally snared for 77 by Ishant Sharma. Wicketkeeper BJ Watling too didn’t last long. Tim Southee played some sparkling shots and scored a quickfire 28.

McCullum though continued his onslaught and got to his second double ton just at the stroke of lunch. 144 runs came in the first session of the second day. However, wickets kept tumbling from the other end. Post lunch McCullum was the last man dismissed caught brilliantly by Ravindra Jadeja for 224, one short of his career-best 225 against India at Hyderabad.

Ishant Sharma was pick of the bowlers for India bagging his fourth five-wicket haul. 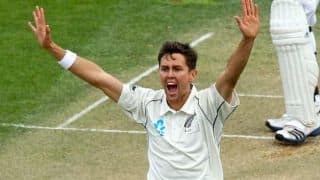