New Zealand will be confident of defending this total against Sri Lanka.

New Zealand have reached a sizable score of 276/8 in the stipulated 50 overs against Sri Lanka in the third One-Day International (ODI) at Nelson’s Saxton Oval. The pitch seemed quite true early on but showed a bit sluggishness later. The spin bowlers came in very handy and they got good amount of turn. Jeffrey Vandersay, the legspinner, was primarily responsible for crushing New Zealand’s momentum after a fairly good start with an over that brought him the dismissal of both Tom Latham and Ross Taylor. Sri Lanka will probably find this pitch a tad easier to bat on since it did not offer too much movement to the fast bowlers. LIVE CRICKET SCORECARD: New Zealand vs Sri Lanka 2015-16, 3rd ODI at Nelson

Martin Guptill started off slow but he soon took stock of the pitch and started playing some powerful shots. One such cut shot had too much power on it and it resulted in his dismissal for a 28-ball 30 as Dilshan took a fine low catch at point. Latham played some excellent drives and his dismissal to Vandersay later was rather soft. LIVE UPDATES: New Zealand vs Sri Lanka 2015-16, 3rd ODI at Nelson

Kane Williamson, coming from a small break, was not at his best yet still good enough to breach the 50-run mark. He was starting to get to his silken best but fell ironically to a juicy full toss by Siriwardana. Mitchell Santner played a good hand of 38 runs after that, again displaying the maturity in his batting. Henry Nicholls had a promising start but got bogged down by the spinners later, finally getting out for 31-ball 20 to Dushmantha Chameera’s pace.

In a trend that is becoming increasingly worrying, Luke Ronchi had another failure with the bat managing just 7 from 13 balls before falling to Nuwan Pradeep. Doug Bracewell played a handy knock in the lower order scoring 30 runs of 34. He only got out in the last over to Pradeep. His wicket turned out to be beneficial for the Kiwis because Tim Southee devoured some horrible bowling by Pradeep to score a 4-ball 18 and boos New Zealand’s cause. Adam Milne also got some handy runs lower down the order.

New Zealand will be confident of defending this total against Sri Lanka given how the bowlers dominated their batsmen in the first couple of games. There is not as much assistance here from the looks of it, but the confidence will be there nonetheless. 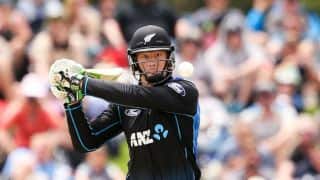