New Zealand set South Africa a solid but achievable target of 174 in the second Twenty20 international in Hamilton on Sunday. 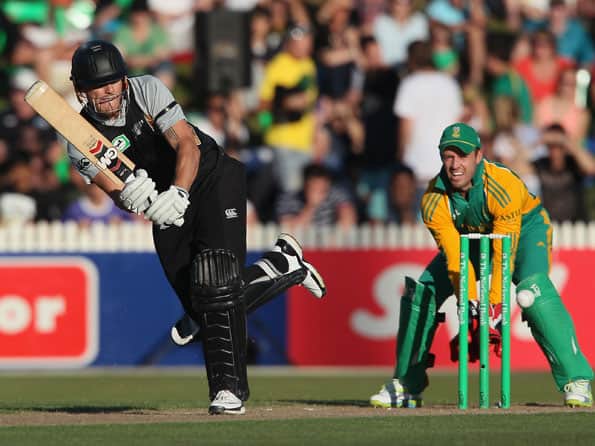 New Zealand set South Africa a solid but achievable target of 174 in the second Twenty20 international in Hamilton on Sunday.

Opener Martin Guptill top scored with 47, just missing out on his seventh successive international half century, as New Zealand ended their innings at four for 173, never managing to dominate despite a batting-friendly pitch.

South Africa’s attack produced a much-improved display from the Proteas’ six-wicket loss in the first match in Wellington, with spinner Johan Botha taking one wicket and conceding 22 in an economical four over spell.

New Zealand, cheered on by a sellout Seddon Park crowd, made a solid start to the innings, opener Rob Nicol dominating the strike with a quick-fire 23 from 17 balls.

A moment’s hesitation taking off for a single proved his downfall, as AB de Villiers pounced on the ball and fired it down the pitch into the stumps at the non-striker’s end.

New Zealand still looked comfortable and were 79 for one at the half-way mark before de Lange coaxed a top edge from dangerman Guptill in the 12th over, which looped through to Albie Morkel in the outfield.

The dismissal lifted the South Africans and they had New Zealand struggling for boundaries until Brendon McCullum decided to lift the pace with a six off Morne Morkel.

He was out in the next over trying to give Johan Botha the same treatment but Franklin maintained the aggressive approach when he came to the crease, hitting four sixes in five balls, two apiece from de Lange and JP Duminy.

While Franklin did not last long, out trying to dab Morne Morkel around his wicket, his 28 off 10 balls proved a valuable contribution before South Africa contained New Zealand’s batsmen again in the final overs. (AFP)