New Zealand were all-out for 248 in the first session of day four, setting India a target of 261 in the second Test match at Bengaluru. 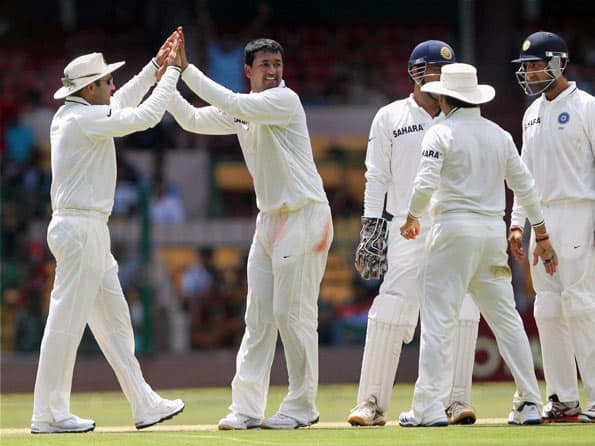 New Zealand all-out for 248 in their second innings PTI

New Zealand were all-out for 248 in the first session of day four, setting India a target of 261 in the second Test match at Bengaluru.

Earlier, Off-spinner Ravichandran Ashwin picked up his third five-wicket haul in four innings on Sunday to push the second Test against New Zealand on a knife edge.

Ashwin (5 for 69), who had a 12-wicket haul in the Hyderabad Test that India won by an innings and 115 runs, bowled quite beautifully to fox the Kiwi batsmen into errors as the visitors ended the day at 232 for nine, just 244 runs in front with two more days left in the Test.

Yadav also intimidated pocket-sized NZ keeper Krugner van Wyk with short-pitched stuff. Van Wyk was struck on his helmet as he took eyes off a short delivery from Yadav prompting the physio to run in on to the ground to attend him. The ‘keeper once again took a beating on his wrist in Yadav’s next delivery.

It was one of Sachin Tendulkar's most pathetic innings, says Tom Alter