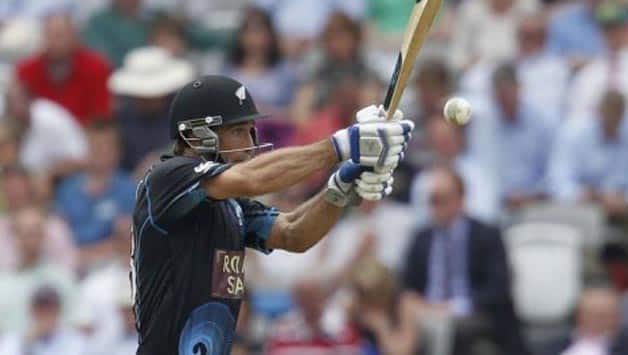 As happened in South Africa earlier this year, the Black Caps have the chance to follow a Test campaign loss with a limited overs series success.

They are certainly well-placed, at 1-0 up with two to play heading into Sunday’s match in Southampton after their five-wicket win at Lord’s on Friday.

Martin Guptill was New Zealand’s hero at Lord’s, making an unbeaten century, just as he’d been in guiding the Black Caps to a three-wicket win over England on home soil in Hamilton this year.

But England bounced back to win that three-match one-day series 2-1.

Alastair Cook‘s men whitewashed New Zealand 2-0 with two crushing wins in the recent Test series in England but Elliott said: “South Africa was quite similar — we came off some tough Test defeats, then we rocked up and won the first [50-over] game. We’re a very confident one-day team, and it was a satisfying win – especially at Lord’s, an unbelievable ground with great tradition.”

However, he added: “We were in the same position in New Zealand, and we don’t want to let our foot off the throat.”

And Elliott was wary of England’s ability to bounce back from poor start.

“All they were missing was one of their batsmen to kick on and get a big one. It’s about taking the performance yesterday [Friday] and giving ourselves a pat on the back, and starting again from ball one. You have to respect this opposition. We saw in New Zealand how they can bounce back pretty well.”

New Zealand were one for two at Lord’s before Guptill and Ross Taylor with a stand of 120. Yet barely a fortnight earlier at Lord’s, New Zealand collapsed to 68 all out in the first Test.

New Zealand captain Brendon McCullum, trying to explain the difference between the team’s Test and one-day batting, said: “Limited overs forces you into a pace you need to play at. Guys assessed the situation and played accordingly (in the Lord’s ODI). “Sometimes in Tests we’re still learning as a group to address the situation and work out a successful plan.”

Veteran left-arm spinner Daniel Vettori took part in training on Saturday after missing his intended return at Lord’s because of a recurrence of his longstanding Achilles injury.

No decision has yet been made on Vettori’s availability for the rest of the series, which concludes in Nottingham on Wednesday, and the subsequent Champions Trophy one-day tournament in the UK.