For a non sub-continental team this total can be termed as a fighting score.

New Zealand lower order showed resilience as they reached 369 for eight at tea in the second Test against Pakistan on Day Two. For a non sub-continental team this total can be termed as a fighting score. Earlier in the day, Pakistan made a strong comeback in the Test after a tiring first day. The Pakistan bowlers struck back on the second day morning and removed both overnight batsmen. Tom Latham and Corey Anderson were dismissed by two new ball bowlers, Ehsan Adil and Rahat Ali respectively. Within the first three overs of the day, New Zealand slipped from 243 for three to 245 for five.

Though Rahat and Ehsan were successful and bowling in good areas, Misbah-ul-Haq introduced Zulfiquar Babar in the attack in the eighth over of the day and he started to trouble the Kiwi batsmen. Soon after both Babar and Yasir Shah were bowling in tandem. The domination of the Pakistan bowlers reflected in the scoring rate of the visitors. After the first hour, New Zealand scored only 24 runs and survival at the wicket was their main objective.

New Zealand slipped further as soon after the drinks break James Neeshem also got out to Yasir Shah. The left-hander along with BJ Watling were playing the spinners well and kept the hopes of 400 plus score alive. But a soft dismissal cost Neesham’s wicket. Watling though kept fighting and remained not out on 18 of 72 balls at Lunch. Mark Craig was giving him company. The Kiwis scored only 52 runs in the first session and lost three wickets. It could have been worse for the visitors as the Pakistan fielders missed couple of easy chances.

In the post lunch session, Watling and Craig formed an important 68 run partnership and because of which the visitors were able to get past 350 mark. Finally Ahzar Ali broke the 68-run partnership by getting the wicket of Watling. It was his second Test wicket. The first one was Sri Lankan great Kumar Sangakkara. Quick dismissals of the two gave Pakistan a chance to finish New Zealand’s innings quickly, but Tim Sothee, Ish Sodhi have added some useful runs so far. It was frustrating for Pakistan as the want to wrap up the innings and get on with their batting. 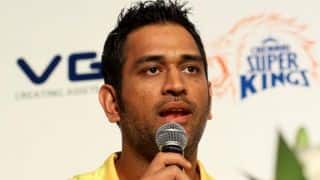