The New Zealand speedstar suffered the injury during the first ODI against India.

Promising New Zealand pacer Adam Milne has been rendered doubtful for the rest of the One-Day International (ODI) series against India after he sustained a side strain during the first ODI of the five-match rubber in Napier.

Milne, who returned with figures of one for 40 from his 7.3 overs in the first ODI yesterday, had an MRI scan after arriving here to ascertain the damage.

According to a report in the New Zealand Herald, Milne will be out of action until at least the end of the ODI series against India.

The report added that according to medical advice, Milne will take at least four to six weeks to get back to his full shape.

Milne, who continuously clocked speed in excess of 150km/h in the first ODI, suffered the injury midway through his eighth over and the start of his third spell.

“It’s tough for Milne to get injured bowling at that pace… It doesn’t look great,” Brendon McCullum was quoted as saying by the newspaper.

Milne’s pace colleague Mitchell McClenaghan said he was “absolutely gutted for the man”.

“To see someone bowl that quick and accurately is a throwback to the Shane Bond days,” McClenaghan said. 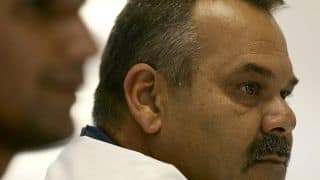