It is expected that Nelson wicket will continue to support the spinners.

New Zealand were paying close attention to the Saxton Oval wicket on New Year’s Day amid suggestions it could offer spin for Saturday’s crucial fourth one-dayer against Sri Lanka. Another win to Sri Lanka would level the series at two wins apiece and turn the fifth and final game into the decider.  A key piece of intelligence New Zealand took from the third match at Nelson’s Saxton Oval on Thursday was a sign the pitch is starting to take turn.  They were thoroughly outplayed in that match with Sri Lanka bettering their 276-run total for the loss of only two wickets against New Zealand’s predominantly pace attack. READ: New Zealand vs Sri Lanka 2015-16, 3rd ODI at Nelson

The New Zealand bowling line-up is already destined for a shake-up with Tim Southee ruled out with an injured left foot, earning a recall for Matt Henry who took four wickets in each of the first two matches. But consideration is also being given to dropping one of the quick bowlers in favour of pairing the leg-break option of Ish Sodhi with the left-arm spin of Mitchell Santner. Santner, who went for a wicketless 59 off his 10 overs in Nelson, said the pitch flattened out during the day with a suggestion of spin.

“It’s starting to turn a little bit so the spinners might get more of a crack,” he said, but added: “It’s still going to be a good batting surface so pushing that 300 mark could be a competitive score.” Kane Williamson, standing in as captain while Brendon McCullum recovers from a sore back, confirmed the two-spinner option was under discussion. “You assess the wicket and you look at the squad and pick the team that best suits the conditions. Naturally they (spinners) will come into a chance to play in the next one.” New Zealand in 2015: A glorious year speckled by stinging heartbreaks

Williamson was not impressed with the way Southee, Adam Milne and Doug Bracewell set about defending New Zealand’s 276 total. “We didn’t bowl particularly well in that first 10 which didn’t help our cause,” he said.  “We would all admit we were off the mark there and they batted very well.” Tillakaratne Dilshan and Danushka Gunathilaka cracked 83 off the first 10 overs with Dilshan going on to make 91 and Gunathilaka 65.  Lahiru Thirimanne was not out 87 when Sri Lanka reached their target with 22 balls to spare.

Thursday was not a good day for Williamson as he watched his side crumble in the face of a rejuvenated Sri Lankan unit he also lost his place at the head of the world Test batting rankings to Australian skipper Steve Smith. Smith leaped from fourth to first following scores of 134 not out and 70 not out in the Boxing Day Test against the West Indies, which Australia won by 177 runs. 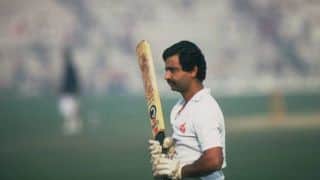