Ishant Sharma has got five wickets in New Zealand’s first innings in the second Test.

New Zealand are at 166 for eight at tea on Day One of the second Test against India in Wellington on February 14, 2014. The Kiwis added 115 runs in the session, but they also lost four wickets. Ishant Sharma got a five-wicket haul and Mohammed Shami took three wickets.

Tim Southee is batting on 19 and Neil Wagner is on naught. The afternoon session on Day One at the Basin Reserve began with New Zealand at 51 for four.

Shami pitched one short and Corey Anderson top-edged a hook behind MS Dhoni for a four. Anderson was in the mood as he freed his arms and got a few boundaries.

Anderson first hit one from Zaheer Khan over the top for a four towards long-on. Ishant then bowled a full delivery and Anderson launched it over long-on for a massive six. A few deliveries later, he creamed another full delivery from Ishant through mid-off for a four.

All this while, Williamson was watchful and scoring slowly. Anderson’s new approach did not take him far as Ishant dismissed him. He bowled from round the wicket and Anderson (24) inside-edged it onto his pads. The ball bounced and looped up in the air as Virat Kohli took a simple catch at third slip.

Ishant was at it as he then bowled a length delivery that shot up a bit and found the outside edge of BJ Watling’s bat. The ball flew to Rohit Sharma at second slip, who took a sharp catch. Watling was out for a duck. This was Ishant’s fifth five-wicket haul in Test cricket.

It could soon have become a six-wicket haul, but Ishant overstepped on a delivery that dismissed Williamson. The batsman inside-edged a length delivery onto his pads and Cheteshwar Pujara took a diving left-handed catch at forward short-leg.

But umpire Steve Davis referred it to the third umpire for a no-ball. Ishant landed his foot on the crease line and no part of his foot was behind it. The delivery was called a no-ball and Williamson survived. He was on 23 at the time.

Williamson suddenly came into life and along with James Neesham, added 47 runs from 44 deliveries. Both the batsmen started finding the boundaries at regular intervals. Debutant Neesham played freely and got the crowd going after a poor first session on Day One.

Neesham got two fours down the ground off Zaheer and Shami. He then sliced one past point for a four off Shami. He also employed the pull shot to good effect as he got another four.

Williamson played some drives and got fours down the ground and through the covers. Williamson removed a bit of gloss from Ishant’s efforts as he struck consecutive fours off his bowling. Just as Williamson neared his half-century, Shami struck to dismiss him.

Shami found the outside edge off Williamson’s bat with a length delivery and Rohit took a low catch at second slip. Williamson was out for 47 off 100 deliveries. Southee joined Neesham in the middle and the duo continued the quick scoring.

They added 32 off 25 deliveries to get New Zealand’s total over the 150-run mark. Southee hit a big six off Zaheer over long-on. Neesham struck a total of seven fours in his innings of 33 from 35 deliveries.

Neesham’s innings came to an end as he edged a short delivery from Shami to Dhoni behind the wickets. Wagner was the new man in. Tea was called after 49 overs as New Zealand were at 166 for eight. 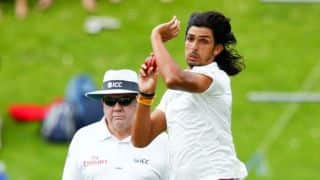 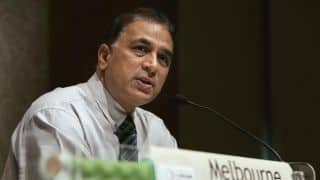