New Zealand are at 257 for eight in their second innings against West Indies.

New Zealand dragged the second Test against West Indies into a fifth day thanks to a battling innings from BJ Watling. The wicketkeeper-batsman is batting on 38 off 150 deliveries as New Zealand are at 257 for eight. They have a slender 18-run lead at stumps on Day Four at the Queen’s Park Oval in Port of Spain, Trinidad.

Ish Sodhi (14) and Tim Southee (15) were the only two wickets to have fallen in the session. Mark Craig is batting on 29 off 102 deliveries. Watling and Craig have added 45 runs for the ninth wicket. Kemar Roach has taken three wickets and Jerome Taylor has got two wickets.

The post-tea session began with New Zealand at 180 for six trailing West Indies by 59 runs. Sodhi got the first boundary in the session as he hit a wide delivery from Jerome Taylor for a four through backward-point. Kemar Roach was brought back into the attack in the 96th over. He struck immediately as Sodhi top-edged a wide delivery to captain Denesh Ramdin.

Tim Southee went on a bit of a rampage soon after he came out to bat. He hit a four, a six and a four off consecutive deliveries bowled by Shannon Gabriel. But Roach dismissed him to get his third wicket. A good length delivery rose on Southee and the ball went towards Kirk Edwards at extra-cover. He took a magnificent diving catch to his left. Southee departed for 15 off 12 deliveries.

The next period of play was low on action. Both Watling and Mark Craig were happy to just let the West Indies bowlers get through the overs. Chris Gayle was brought in and he bowled a loose wide delivery. Craig threw his bat at it and got a thick outside edge as the ball raced away for a four towards third-man.

With that boundary, New Zealand took the lead in the Test match. New Zealand got to their 250 in the 121st over. Taylor bowled a good length delivery and Craig edged the ball in-between third slip and gully for a four. The West Indies bowlers were trying to mix it up to try and get a wicket. Gabriel bowled a sharp bouncer and Watling had to duck underneath it quickly.

Gabriel then bowled a low full-toss and Watling guided the ball to deep mid-wicket for a single. The last over of the day was bowled by Benn. Only one run came from the over. Stumps were called for and New Zealand led West Indies by 18 runs. They also have only two wickets left. It will be a battle for them to save the match. West Indies are firmly in the driving seat as the match heads into Day Five. 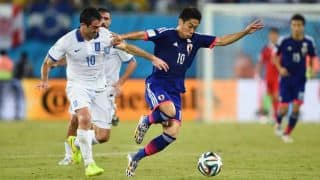