Pacers Matt Henry and Lockie Ferguson miss out for the upcoming series in Sri Lanka.

New Zealand unveiled a spin-heavy attack Monday for the opening round of their World Test Championship campaign against Sri Lanka next month.

Coach Gary Stead named four spinners in his 15-man squad for the two-Test series in Sri Lanka that will mark both teams’ debut in the new ICC World Test Championship that runs through to 2021.

Stead said the Sri Lankan wickets were expected to turn and he was adopting a “horses-for-courses” strategy in selecting Ajaz Patel, Will Somerville, Mitchell Santner and Todd Astle.

“Playing three spinners is an option in Sri Lankan conditions and we believe this group provides the best variations and skill mix on offer,” he said.

The long-awaited Test championship will see nine nations vying for points in home and away series in a bid to reach a deciding match at Lord’s in June 2021.

New Zealand will play 14 Tests against six nations as part of the competition.

Stead said the Black Caps were ready for a new challenge after their dramatic defeat in the ODI World Cup final, when the scores were tied after regular play and a super over, but England won because they scored more boundaries.

“It’s good timing for us after the World Cup,” he said. “It was an incredible time for the team and the country, but we’re now excited to move forward as a group and sink our teeth into another opportunity.” 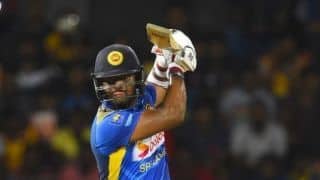