New Zealand registered a big win by two wickets against Sri Lanka in the first Test at the Hagley Oval in Christchurch on Monday. Chasing a modest target of 105 runs to win, the hosts scored 107 for two after 30.4 overs with Kane Williamson and Ross Taylor at the crease.

Taylor cracked six boundaries to reach 39 not out and Williamson scored a solid 75-ball 31 not out as the Kiwis completed their fifth Test win in 2014 in an emphatic manner. Earlier in the day, Tim Southee had New Zealand closing in on an early end to the first Test against Sri Lanka Monday with the tourists all out for 407 in their second innings at lunch on the fourth day. New Zealand need 105 to win after Southee took three for 19 in a nine-over spell of high-class seam bowling.

Only lusty hitting at the end by Shaminda Eranga and Suranga Lakmal, who added 59 for the last wicket, meant New Zealand faced a respectable target. Under a cloudless sky and with an ageing ball, Southee extracted plenty of movement as Sri Lanka resumed the day at 293-5 requiring a further 10 runs to make New Zealand bat again, AFP reported.

Soon after Angelo Mathews and nightwatchman Tharindu Kaushal had steered Sri Lanka past the crucial 303 mark, the New Zealand right-arm seamer made the crucial breakthrough.

Kaushal was first to fall for 12 with an edge to Mark Craig at second slip which brought Sri Lanka’s last recognised batsman, Prasanna Jayawardene, to the middle. 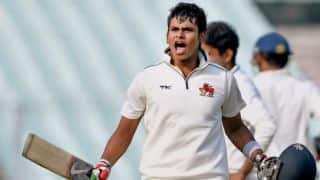 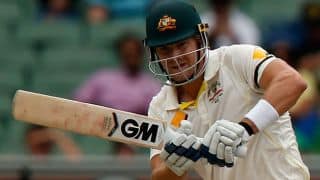