The West Indies were bowled out for 460 in their first innings just before tea on Day Three.

New Zealand entered tea on Day Three of the second Test trailing West Indies by 235 runs. They bowled out West Indies for 460 just before the end of the second session at Port of Spain in Trinidad. Tom Latham and Brendon McCullum are both batting two as New Zealand are at four for no loss.

Jermaine Blackwood scored a half-century on debut for West Indies in the first innings. Captain Denesh Ramdin scored 32 runs. Leg-spinner Ish Sodhi was the pick of the bowlers with four wickets. But most of his wickets were of lower-order batsmen. Trent Boult took three wickets.

West Indies started the post-lunch session at 396 for seven. Blackwood got to his half-century with a single off Kane Williamson on the final delivery in the 130th over. Williamson and Jimmy Neesham bowled in tandem for a while after the lunch break. Sodhi then replaced Williamson in the 134th over.

The hosts then got to their 450 in the 135th over as Blackwood took a single behind square on the leg side. Blackwood then cleared his front leg and swatted one from Sodhi over mid-on for a four. But Blackwood edged a turning delivery from Sodhi next up and Ross Taylor took the catch at first slip. Blackwood was out for 63 off 110 deliveries.

Jerome Taylor got off the mark with a four over square-leg. Neesham bowled a good length delivery and Ramdin drove at it. He only edged the ball to first slip, where Ross Taylor took an excellent diving catch to his right. Jerome Taylor then mishit one from Sodhi straight to Mark Craig at long-off. That was the end of the West Indies first innings for 460 runs. They took a first innings lead of 239 runs over New Zealand.

Latham and McCullum played out the five overs till tea as New Zealand now trail West Indies by 235 runs. 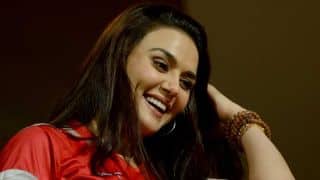