Afghanistan will hope to present a serious threat.

New Zealand will take on Afghanistan in the Pool A match of the ICC Cricket World Cup 2015 which will be played at McLean Park, Napier on March 8. It will be one of the low key contests as Afghanistan will face the hosts New Zealand on their own soil.

New Zealand have won all their four encounters of the World Cup, having beaten Sri Lanka in the opening game and then went on to beat Scotland, England and Australia. They beat the first three team with varied levels of ease but managed to defeat Australia with only one wicket to spare. LIVE UPDATES: New Zealand vs Afghanistan Match 31 here

Afghanistan have lost to Sri Lanka and Australia but have plucked a win against Scotland. Afghanistan’s bowling attack is enviable. They have Shapoor Zadran, Dawlat Zadran, Hamid Hassan who constitute a formidable fast bowling trio.

But New Zealand boast names like Tim Southee, Trent Boult and Adam Milne who have been lethal in the World Cup with the swinging conditions. They have a quality spinner in Daniel Vettori and their batting line up is miles ahead of Afghanistan. All factors point at New Zealand as favourites but Afghanistan may produce a thrilling encounter. 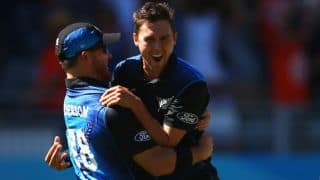