Mahmudullah and Boult have been fined 10 and 15 per cent of their match fees, respectively.

New Zealand s left-arm pacer Trent Boult and Bangladesh allrounder Mahmudullah were charged for breaching the ICC Code of Conduct in two separate incidents during the second one-day international at the Hagley Oval in Christchurch on Saturday.

According to a media release issued by the ICC on Sunday, Mahmudullah and Boult have been fined 10 and 15 per cent of their match fees, respectively.

Mahmudullah, who scored just 7 before he was dismissed by Todd Astle, was found guilty of breaching Article 2.2 of the ICC Code of Conduct, which relates to abuse of cricket equipment or clothing, ground equipment or fixtures and fittings during an international match, while Boult was found using obscene language which was audible and was found to violate Article 2.3 which deals with use of an audible obscenity during an international match.

The duo have been handed one demerit point each. (ALSO READ: Felt like I got back to where I was a couple of years ago: Martin Guptill)

Mahmudullah, when leaving the ground after being given out during Saturday s match, struck the picket fence with his bat, while Boult used audible obscene words twice when his side was bowling.

According to the rule book, Level 1 breaches carry a minimum penalty of an official reprimand, a maximum penalty of 50 per cent of a player s match fee, and one or two demerit points. 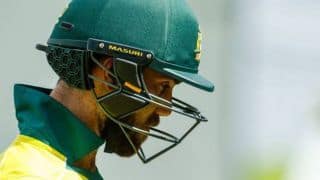