The day saw various seesawing moments but it was the veteran Bangladesh all-rounder who's wily spin earned Bangladesh an upper hand at stumps.

Shakib Al Hasan s three-for in the last session of Day Two, of the second Test against New Zealand, have put the game in Bangladesh s favour. Shakib got the wickets of Mitchell Santner (29), BJ Watling (1) and Colin de Grandhomme (0) to stop the hosts from surpassing Bangladesh’s 289 in the first innings. Persistent rain forced early stumps, as New Zealand still trail by 29 runs, as they are 260 for 7. Henry Nicholls and Tim Southee are at the crease batting on 56 and 4 respectively. However, on Day Three, Nicholls will have to play a vital role to see his side cover the 29-run deficit and go well beyond Bangladesh to give his team the upper hand.

Resuming the third session at 192 for 4, New Zealand were trailing by 97. They had Nicholls and Micthell Santner at the crease. Nicholls took the aggressor s role and scored the bulk of the runs, while Santner played second fiddle. Their sensible cricket helped them put up a crucial 75-run stand off 125 deliveries, for the fifth wicket.

Things were going the hosts way despite constant hammering by the Bangladeshi quicks. To make further damage, Shakib was brought into the attack, and he straightaway got the wicket of Santner, who looked to play it down the leg side but missed the ball and was struck in front. He did take a review, albeit New Zealand had all their reviews left. It, however, looked plumb. Watling was the next batsman, but his presence lasted only for four deliveries, as Shakib struck again in a matter of 10 balls. Watling tried to cut the ball as there was width on offer, but the ball didn t turn and thus taking a bottom edge onto the stumps.

New Zealand were going at a decent pace, but Shakib stung their middle order and pulled them down from 252 for 4 to 256 for 7. The last man to get dismissed on Day Two was de Grandhomme, who on the third delivery after Watling dismissal, missed the arm ball and was eventually knocked over. These three wickets in a matter of Shakib’s two overs rattled the hosts.

This day displayed a topsy-turvy action. Earlier in the first session, hosts were left in a tight spot as Kamrul Islam Rabbi took two wickets in three deliveries. But then came Ross Taylor (77) and Tom Latham (68), who lifted their team from 47 for 2 to put Bangladesh on the back foot, adding 106 at 4.41 per over. The hosts, though, lost the momentum towards the end of the second session, dismissing both these well-settled batsmen. 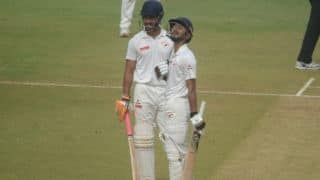 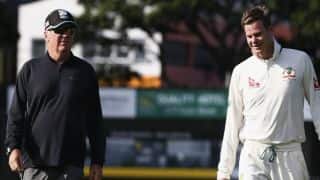