New Zealand declared with a 221-run first innings lead and 23 overs remaining in the day.

New Zealand declared their first innings at 432/6 after a double-century by Ross Taylor gave them a chance to win the rain-affected second Test against Bangladesh in Wellington on Monday.

Taylor, who led a scoring blitz on day four, reached his third double-century, raised his bat in salute, and was dismissed from the next ball he faced.

New Zealand declared soon after with a 221-run first innings lead and 23 overs remaining in the day.

When Taylor reached his century, with a huge six over long on off Taijul Islam, he passed his mentor, the late Martin Crowe, and became New Zealand’s second most prolific century-maker with 18, two behind Kane Williamson. (FULL SCORECARD: NEW ZEALAND vs BANGLADESH)

Henry Nicholls, who featured in a 216-run partnership with Taylor for the fourth wicket, was out soon after tea for 107.

Williamson, who made 74 in a 172-run stand with Taylor for the third wicket, was taken to hospital afterwards for a scan on an injured left shoulder.

Although cleared of any serious injury he will not field at the start of the Bangladesh second innings, with Tim Southee leading the side. 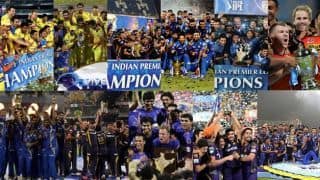 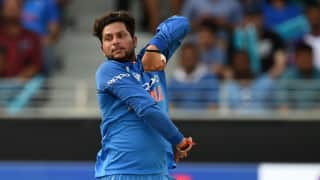