New Zealand and Bangladesh are set to play their final pool matches of T20 World Cup 2016 at Eden Gardens, Kolkata on Saturday.

New Zealand and Bangladesh are set to play their final pool matches of T20 World Cup 2016 at Eden Gardens, Kolkata on Saturday. The live telecast of the match will be available over Star Sports HD 1 and Star Sports 1. The online streaming will be available on starsports.com and mobile streaming on hotstar.com. If New Zealand win the match against Bangladesh, this will probably be the time they will clean sweep all the matches ahead of the semi-final. Bangladesh on the other hand have faced defeat in the entire tournament and hope to end it on positive note. New Zealand have maintained the same squad in their tournament so far and have not made use of their ace pacers Tim Southee and Trent Boult. LIVE CRICKET SCORECARD: New Zealand vs Bangladesh, T20 World Cup 2016, Match 28 at Kolkata.

New Zealand have looked every bit the team to beat in their first assignment post Brendon McCullum. His imprint is pretty much evident on this team, which continues to play his brand of aggressive cricket, thus takes his legacy forward. Bangladesh’s campaign has been a tragic one. From the ban on Taskin Ahmed and Arafat Sunny, due to suspect bowling action to the heartbreaking one run loss against India, nothing has gone in their favor in this tournament. A win here will act as a soothing balm to the millions of enthusiastic supporters Bangladeshis have across the globe. New Zealand with a settled batting unit and a performing spin trio of  Nathan McCullum, Ish Sodhi and Mitchell Santner, the team looks well on course for its first World title. 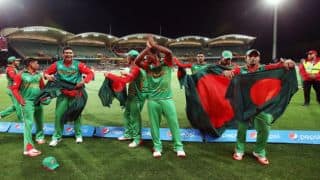