A disappointing bunch of New Zealand were sent back home after their defeat against England in 1st semi-final of T20 World Cup 2016 at Delhi on Wednesday.

A disappointing bunch of New Zealand were sent back home after their defeat against England in 1st semi-final of T20 World Cup 2016 at Delhi on Wednesday. It got back the memories of ICC World Cup 2015, where they missed the edge to make it till the end. Coming undefeated until semi-final, the Kiwis were favorites, until the tables turned and situation went for a toss. “It’s such a fickle format,” Kane Williamson, the New Zealand captain, said a couple of times in the post-match press conference at the Feroz Shah Kotla in New Delhi on Wednesday, as reported on cricbuzz. Full Cricket Scorecard: England v New Zealand, T20 World Cup 2016, 1st Semi-Final at Delhi

He also believed that the game was over when New Zealand did give the right start but were thumped in the death overs with wickets crumbling. “We were 20-25 short. England bowled really well in that sort of death period which made life difficult. Unfortunately, we weren’t able to connect as well as we would have liked. It certainly wasn’t due to the lack of trying. It’s just the game we are playing. It’s such a fine line.”

“Their death bowling was very good. In between they hit the yorkers really well. By taking those wickets off certain deliveries, that puts you under pressure. As a new batter coming to the crease and trying to hit from ball one, that is never easy. They were able to take wickets consistently through that middle to backend period, which meant that it stemmed the flow of runs in that death stage. You can look at it in a number of areas, but at the end of the day, we just didn’t get things right. It wasn’t for the lack of trying, it’s just a fine line in the game that we play. We will all be better for it. We will move on and be a better team,” Williamson said. Williamson also gave special credit to his spinners to get his team so far in this tournament. READ: T20 World Cup 2016, Semi-final 1, England vs New Zealand: England’s likely XI

“Ish Sodhi had a fantastic T20 tournament along with Mitch Santner. We’ve played on so many different wickets and the guys have adapted well, grown so much as a bowling unit. I suppose they have matured as well in this part of the world, which is extremely important for themselves and the team moving forward. There have been a number of guys who have had a very good tournament. In fact, I think when you reflect back on some of the surfaces, we have had low scores that were winning totals. I think the batters were very good as well throughout the tournament in contributing to those winning totals,” he said.

Williamson also felt that though spinners had their share, the pitch on Wednesday was not what they were aiming for. He also said keeping Tim Southee and Trent Boult away from the tournament was not a bad decision as the pitches were favoring spinners. At the end of the conference, Williamson summed it up saying, New Zealand just lost to a better team on the day.

“It’s a very different wicket. Certainly slower, but I think it’s important that whoever gets to Calcutta, they read the wicket as best as they can. Don’t be too conservative about how they want to play their cricket. Be prepared to do it differently. Because the cricket you see here might be difficult to implement on the Calcutta wicket,” he said, when asked about advice on playing in Kolkata. 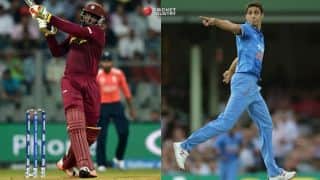 T20 World Cup 2016: Faf du Plessis has ruled out plans to step down as captain