After 15 overs Pakistan reached 44 for the loss of three wickets.

Pakistan are in deep trouble in the first One-Day International (ODI) at Wellington, as they have lost three early wickets withing first 15 overs. They lost the wickets of both openers and number three batsman Younis Khan cheaply. First to go was Mohammad Hafeez, who was clean bowled by Kyle Mills in the very first over of the match.

After that wicket the other opener  Ahmed Shehzad along with number three Younis Khan tried to steady the ship. The were negotiating the Kiwi blowers efficiently, but in the 10th over Trent Boult struck. Shehzad was out, caught behind. Next to get out was Younis, who was given LBW in the bowling of Mills. After 15 overs Pakistan reached 44 for the loss of three wickets.

Earlier New Zealand skipper Brendon McCullum won the toss and asked Pakistan to bat first. The Kiwis have decided to rest Daniel  Vettori, Tim Southee and Mitchell McClenaghan for this game. Kane Williamson also missed out due to a sore shoulder. Brendon McCullum, Nathan McCullum, Trent Boult and Adam Milne are back in the playing eleven. 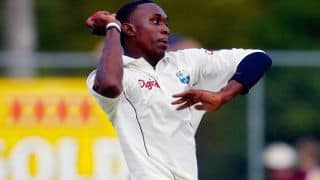