The pitch is still assisting bowlers. And if Pakistan could get another 80 odd runs, their pacers would relish the chance of having a shot at the Kiwi batting with some runs in the kitty.

Fortunes fluctuated like pendulum on Day Three of the first Test between New Zealand and Pakistan at Christchurch. If the first two sessions belonged to Pakistan, the final session went to the hosts New Zealand, as they picked six wickets for 79 to leave Pakistan’s second innings in tatters and put themselves in sight of a comprehensive first Test victory at the end of the third day. Trent Boult and Neil Wagner were the chief architects of Pakistan s collapse as they finished the day with 3 for 18 and 2 for 21 respectively. Having lost six wickets in the final session at Hagley Oval, Pakistan ended the day at 129; ahead by only 62 runs with two days remaining. FULL SCORECARD: PAKISTAN vs NEW ZEALAND, 1st TEST AT CHRISTCHURCH.

Sohail Khan (22) and Asad Shafiq (6) were holding fort for the visitors with the Test likely to be all over in three playing days after the scheduled first day was washed out. Pakistan put up a dogged batting display till tea with the score reading 1 for 50. Azhar Ali and Babar Azam were painstakingly building their second innings — accumulating 37 runs in 23 overs. But, in the sixth over after tea, Azam (29) became first victim of Wagner s short-pitched stuff when he gloved a rising delivery to wicketkeeper BJ Watling.

It was Wagner s 100th scalp in his 26th Test, making him the second-fastest New Zealander to claim a century of wickets after Richard Hadlee reached the mark in 25 matches; interestingly, faster than Boult and Tim Southee. The procession began soon after his dismissal as Younis Khan lasted only eight balls before he gloved a Wagner bouncer to Watling and Pakistan had gone from 58-1 to 64-3 and were still three runs in deficit. LIVE BLOG, DAY 3: PAKISTAN vs NEW ZEALAND, 1st TEST AT CHRISTCHURCH.

Captain Misbah-ul-Haq tried to knock Southee out of the attack with a four and two off successive balls but he pulled the next delivery to Boult running around the long-leg boundary and he was gone for 13, thus becoming third victim of short-pitched bowling. Boult then bowled Azhar to end the opener’s marathon innings in which he faced 173 balls in more than four hours for only 31 runs. Next to go was Sarfraz Ahmed (2) followed by Mohammad Aamer (6).

Earlier, the only wicket to fall in the second session of Sami Aslam was scalped by Colin de Grandhomme, whose first innings 6-41 was the best bowling performance by a New Zealander on debut. The gritty all-rounder also played a cameo of 29 after New Zealand lost the plot in their first innings. Overnight batsmen Jeet Raval and Henry Nicholls were gone in the first four overs with Raval unable to add to his overnight 55 and Nicholls adding only one run to be gone for 30.

De Grandhomme, who has rarely been out of the spotlight in his maiden Test, belted a quickfire 29 that included six boundaries while Southee (22) and Wagner (21) also plundered quick runs in their brief cameos. The New Zealand innings folded for 200 in 55.5 overs, just four more than Pakistan’s first innings of 133. They managed to get a lead of 67 runs; extremely crucial in the context of the game. Rahat Ali was the chief destroyer for Pakistan with four for 62 while Sohail and Aamer took three wickets each.

Pakistan are just 62 runs ahead with three wickets in hand. Their defeat in this first Test looks imminent, as the conventional wisdom says New Zealand should close this game in the first session on Day Four. However, the clich d saying says never to predict in a cricket match until the last ball has been bowled. They may be down and out, but their coach Mickey Arthur put up a confident front after the third day s play. “We’ve been out-played so far,” Pakistan coach Arthur said, but he refused to concede defeat saying they would not need many more runs to set up a tight finish. “We feel that 150-170, we could have a real chance because there’s still enough in the wicket,” said Arthur. It looks unlikely that Pakistan would get those many runs with only one specialist batsman Shafiq in the middle. But, you never know.

The pitch is still assisting bowlers. And if Pakistan could get another 80 odd runs, their pacers would relish the chance of having a shot at the Kiwi batting with some runs in the kitty. If that happens, we have a game on; otherwise it is advantage New Zealand. It could well just be a formality for them as they walk out on Day Four and wrap up the game in the first session itself. 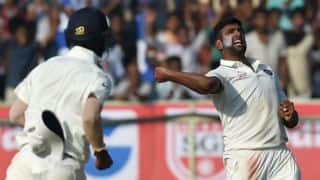