Wagner first, and then Southee and Boult adopted the short-pitched strategy for Pakistani batsmen which paid rich dividends. Three of their top-order batsmen, Babar Azam, Younis Khan and Misbah-ul-Haq fell prey to the strategy.

After being down in the first two sessions, New Zealand made a terrific comeback in the final session of Day Three of the first Test at Christchurch. Their pacers have put them on the brink of a famous win over Pakistan. Famous, because it can potentially end Pakistan s 12-series winning streak in New Zealand going on since 1985. The architects of this win, if it arrives of course on Day Four, shall be the pace quartet of Tim Southee, Trent Boult, Neil Wagner and Colin de Grandhomme. Starting the final session with the score of 50 for 1, Pakistan lost 6 wickets for 79 runs to end on 129 for 7 at stumps on Day Three. They are ahead by 62 runs with just three wickets in hand. Boult was the pick of the bowlers with 3 wickets, followed by Wagner s 2 and Southee s and de Grandhomme s 1 each. FULL CRICKET SCORECARD: New Zealand vs Pakistan, 1st Test at Christchurch.

Even if they squandered the slight advantage they had, Pakistan did well in the first two sessions. A dogged batting display by their openers Sami Aslam and Azhar Ali and resistance by Babar Azam saw them take tea at the score of 50 for 1. Azhar in particular showed tremendous patience and great temperament to stay unbeaten on 19 off 104 balls. The only success New Zealand had in the session was due to their star debutant Colin de Grandhomme, who picked Aslam for 7 (57 balls).

But post tea, the Kiwi bowlers were all over them. Wagner first, and then Southee and Boult adopted the short-pitched strategy for Pakistani batsmen which paid rich dividends. Three of their top-order batsmen, Babar Azam, Younis Khan and Misbah-ul-Haq fell prey to the strategy.

The pitch was assisting seamers and kiwi bowlers, who were bowling impeccable line and length and keeping things tight but were deprived of wickets till the second session, got paid for the relentless pressure they had applied. The Pakistanis finally crumbled under the sustained pressure and gave away wickets in quick succession.

For Pakistan, Azhar played a resolute innings of 31 off 173 balls. His patient knock was finally ended by Boult s Yorker. A similar Yorker later also removed Sarfraz Ahmed for 2. Towards the end of day s play, when it seemed Pakistan may lose this Test on Day Three itself, Sohail Khan hit a few scoring shots and remained unbeaten on 22 off 18, thus adding some vital runs to Pakistan s lead. Giving him company was Asad Shafiq on 6.

Earlier in the day, Pakistan s pace trio of Mohammad Aamer, Rahat Ali and Sohail Khan exploited the conditions conducive for seam and swing to the fullest and in the process, scripted a fightback as New Zealand were bundled out for 200 in the first session on Day Three of the first Test at Christchurch. Rahat took 4 wickets, while Aamer and Sohail shared 3 wickets each to break the back of Kiwi batting. New Zealand added 96 runs to their overnight total of 104 for 3 and lost 7 wickets in the session. They took a vital lead of 67 runs.

This match could well be over on Day Four, effectively the third day in the game after first day was washed out. Pakistan at the moment are on the back foot and New Zealand firm favourites. But as the cliched thing goes, nothing can be predicted in a cricket game till the last ball has been bowled. 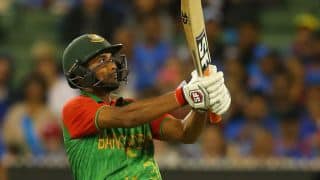