Pakistan, which was bundled out for only 133 in their first innings, were bowled out for 171 in their second innings to set New Zealand a small target of 105 runs which the hosts achieved with eight wickets to spare.

Former Test cricketer Shoaib Mohammad has criticised Pakistan batsmen s inability to correct their mistakes as Misbah-ul-Haq-led side suffered yet another batting collapse which eventually resulted in their defeat in the opening Test of the two match series against New Zealand. Pakistan, which was bundled out for only 133 in their first innings, were bowled out for 171 in their second innings to set New Zealand a small target of 105 runs which the hosts achieved with eight wickets to spare. While acknowledging that the conditions were tough, Shoaib believes Pakistan should have dealt with the situation better. Pakistan batsmen, to the frustration of many, repeated the same mistakes After a terrible outing with the bat in the first innings, they should have been better prepared but that did not happen. Most of the batsmen gave away their wickets extremely cheaply yet again, he was quoted as saying by Express Tribune. Full Cricket Scores, New Zealand vs Pakistan, 1st Test, Christchurch

The 55-year-old former opener further said that Pakistan were playing with the same careless attitude they showed in the series against the West Indies in the UAE. “The batsmen also made a lot of mistakes against the West Indies; they played the short balls poorly in UAE and they are doing the same [against New Zealand], he said. It was understood that the conditions were going to be difficult and the bat couldn t dominate the ball It s hard to stay on the crease for long periods and Pakistan were expected to score at a much faster rate than their current pace. New Zealand did exactly that and it worked for them. The Pakistan batsmen should have rotated the strike more frequently, he added.

The former Test opener, however, heaped praise on the Pakistan bowlers, saying they have enough ability to even defend a small total. New Zealand, no doubt, are dominating but Pakistan have a lot of quality in their bowling. The bowlers can certainly get a lot out of this track at the Hagley Oval, he said. 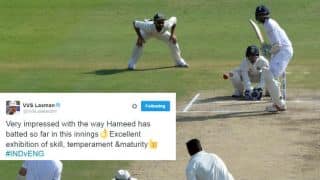