After having a brilliant first session, where they did concede the lead but restricted New Zealand to a modest 200 after being 104 for 3 overnight, Pakistan did well in the second session of Day Three of first Test at Christchurch. A dogged batting display by Pakistani openers Sami Aslam and Azhar Ali and resistance by Babar Azam saw them take tea at the score of 50 for 1. Azhar in particular showed tremendous patience and great temperament to stay unbeaten on 19 off 104 balls. The only success New Zealand had in the session was due to their star debutant Colin de Grandhomme, who picked Aslam for 7 (57 balls). Pakistan are still behind New Zealand by 17 runs with 9 wickets in hand. FULL CRICKET SCORECARD: New Zealand vs Pakistan, 1st Test at Christchurch.

The two openers put on display a batting effort full of patience. Starting the session from 6 without loss, the two openers left and blocked the deliveries upfront to see the new ball through. The pitch was assisting seamers and Trent Boult and Tim Southee were bowling impeccable line and length. They were relentless with their approach and it showed as Pakistan reached to the double digit score in the 14th over of their innings. Even as they were not scoring runs, they did well enough to flatten both the ball and the bowlers.

Both Southee and Boult kept bowling tight lines, but were denied a wicket. Skipper Kane Williamson then turned to the first innings hero de Grandhomme and he delivered for his captain. Grandhomme ended Aslam s resistance and got the breakthrough for his team when the batsman poked to a ball outside off and offered a simple catch to BJ Watling behind the stumps. It was the debutant s seventh wicket of the match. This brought young Babar in the middle. There was some unwanted focus on the youngster with his batting position under the scanner. Experts felt Asad Shafiq should have been batting at No.3 instead of him and his failure in the first innings only strengthened that argument.

But he did well in the second innings to silence his critics. With his resolute innings and stand with Azhar thus far, he did well to nullify the new ball and the conditions. Pakistan The two guided the team to 50 for 1 at tea. They still trail by 17 but if they can get another good session to back up their two good sessions today, they can get ahead in the game. Advantage, for now, rests with New Zealand, who have kept things tight too.

Earlier in the day, Pakistan s pace trio of Mohammad Aamer, Rahat Ali and Sohail Khan exploited the conditions conducive for seam and swing to the fullest and in the process, scripted a fightback as New Zealand were bundled out for 200 in the first session on Day Three of the first Test at Christchurch. Rahat took 4 wickets, while Aamer and Sohail shared 3 wickets each to break the back of Kiwi batting. New Zealand added 96 runs to their overnight total of 104 for 3 and lost 7 wickets in the session. They took a vital lead of 67 runs. At lunch, Pakistan were 6 without loss in their second innings. 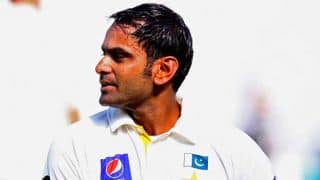 Mohammad Hafeez: I have remodelled my bowling action